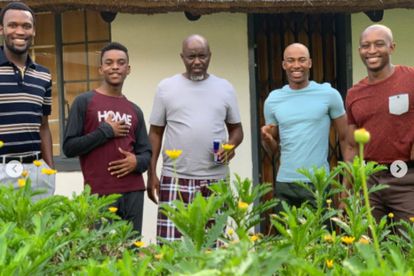 Ferguson Films recently announced on their social media pages that they’ve cast four male actors – who will play the characters of Brutus Khoza’s sons – Bhambatha, Mlungisi, Cebo’elihle, and Nkosiyabo in The Queen.

This is after the telenovela’s casting director – Lesedi Matsunyane- Ferguson announced in January that they’re looking for four male actors to play the character, Brutus’ sons.

ALSO READ: ‘He had one job’: ‘The Queen’ fans mock Hector’s kiss with Harriet

WHO ARE BRUTUS’ FOUR SONS?

Makoti actor Siphesihle Vazi also revealed on his social media accounts that he’s been cast as one of Brutus’ four sons’ Bhambatha, Mlungisi, Cebo’elihle, and Nkosiyabo in the cancelled Mzansi Magic The Queen.

Vazi tweeted: “Now that the cat is officially out the bag!! I really hope you get to LOVE or HATE Mlungisi Khoza, son of Brutas Khoza on #TheQueenMzansi along with his 3 brothers Cebo’lihle (Ntobeko Mathebula) Bhambatha (Khumbuza Meyiwa) Nkosi’yabo (Craig Nobela).”

Brutus’ eldest son Bhambatha Khoza is in his mid-30s and will be played by Khumbuza Meyiwa.

He is the black sheep in the Brutus household who is always misunderstood according to the casting description.

This has made him defensive as he feels his rightful place in the family has been taken away. He unknowingly behaves like his dad Brutus, often wearing his signature clothes and talking like him.

His second-born Mlungisi Khoza is in his late 20s, a rebel among the boys, and will be played by Siphesihle Vazi.

Mlungisi thinks he has a solution to every problem, and his methods involve fists and a gun.

The third-son Cebo’elihle Khoza is played by Ntobeko Mathebula who is in his early 20s.

Cebo is a peacemaker unlike his three brothers and his troublesome father – Brutus (played by Themba Ndaba).

He is wise beyond his years, speaks words of wisdom, and is not ruled by emotions. Cebo’elihle does not talk a lot but only talks when it is necessary.

Craig is 21-years-old, Brutus’ favourite son – who is spoilt, loves a flashy lifestyle, and is a trouble maker like his popular father.

The TVSA Monday 28 March teaser reveals that Brutus will move to KwaZulu-Natal tonight after getting kicked out of the Khoza mansion by Harriet Khoza (played by Connie Ferguson).

“Brutus is permanently back home much to MaJali’s delight.”

“Tensions run high in the KZN homestead. All the Khoza boys disagree on a way forward for Brutus.