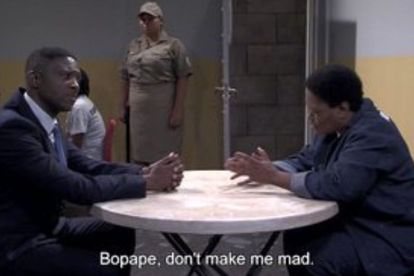 ‘Her lawyer is a match’: #SkeemSaam wish for Bopape and Meikie to date. Image via Twitter @SkeemSaam3

‘Her lawyer is a match’: #SkeemSaam wish for Bopape and Meikie to date. Image via Twitter @SkeemSaam3

Viewers of Skeem Saam believe that John’s wife – Meikie Maputla will make a better match with her lawyer Mr Bopape as he’s treated her better than him and has patience for her.

Mr Bopape has also shown that he cares for her and has even reprimanded John for his behaviour towards Meikie.

Bopape (Patrick Bokaba) was Meikie’s rock when she got sentenced to prison and even assured her that she’ll be released from prison when they appealed her sentence.

He’s also been a great role model, mentor, and father figure to Meikie’s eldest son Leeto (Eric Macheru) who used to work for his firm.

Viewers also noticed how protective he’s been over her and how he’s disgusted by her husband’s behaviour throughout her trial.

Bopape never gave up on her even when John (Africa Tsoai) insisted she must stay in prison because she’s a danger to society.

He’s a great match because he’s stable, a gentleman, more mature than John, sympathetic and there’s never been any mention of his wife in the educational soapie.

Meikie will also be a single woman soon as her husband John wants to file for divorce. He believes that his marriage to Meikie is over and wants to move on with his life.

“Meikie must just divorce Maputla and get with Adv Bopape.”

“Mekie and Bopape would make a great couple.”

“Is Bopape married? I so want him and Meiki to shake Turf Up.”

“Meikie should get with Bopape. Every time I see them together I get more convinced.”

“Now Bopape is playing both a lawyer and Husband to Meikie Maputla.”

“In other news, Bopape is falling for Meikie and vice versa.”