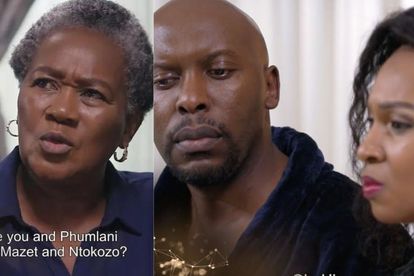 Gomora’s Thati will be devastated when her husband kidnaps her daughter Buhle and heartbroken when her mother MamSonto kills her second husband Phumlani.

Everyone will be shocked when they realise that her husband isn’t as squeaky clean as he pretends to be.

Gomora’s fan-favourite resident MamSonto is about to find out that Thati’s second husband Phumlani – who is also her brother-in-law from her first marriage – Mbongeni is a gangster in a suit.

MamSonto (Connie Chiume) threatened to kill Sdumo and brains at the hospital last week when they got a beating from their boss.

But Phumlani (Buyile Mdladla) appeared before Sdumo could reveal who he works for and kept his mouth shut.

The TVSA March teasers reveal that Phumlani’s cover is about to get exposed this week when Buhle hears him ordering a hit on someone.

Phumlani will then kidnap Buhle (Ama Qamata) so she doesn’t blow his cover and will pretend he doesn’t know about it.

This week’s teasers confirm that he will order a hit on Stompie (Ntandazo Mndayi) who will live to tell the tale.

Viewers have now figured out that Phumlani’s mission is to make MamSonto’s life difficult.

He hasn’t forgiven her for killing her brother and is keeping her busy in Gomora by creating havoc.

Phumlani desperately wants to be seen as a hero in Thati’s eyes by coming up with solutions to problems he created.

He paid Brains and Sdumo to kidnap high school girls in Gomora so that the community could ask for MamSonto’s assistance.

He also married Thati (Katlego Danke) out of spite and doesn’t love her or his niece – Buhle.

ALSO READ:‘Gomora’: Inside all the drama at Thati and Phumlani’s glamorous wedding

The Gomora season three teasers have revealed that Thati will turn against her mother – MamSonto and don’t reveal Phumlani’s face.

This suggests that Thati will turn her back on her mother for killing him because she also killed her first husband.

She will blame her mother for her misfortunes and might turn into a hard-core criminal just like her mother.