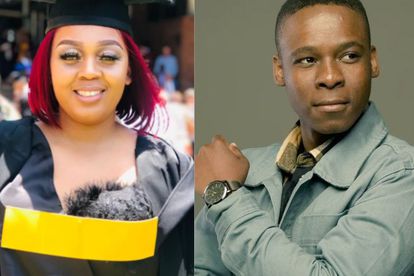 Scandal! actor Mathews Rantsoma, who plays the role of the late Lindiwe Ngema’s husband Nhlamulo left viewers of the e.tv soapie confused after he posted a picture of his “real life” wife on Instagram and congratulated her for graduating.

MATHEWS RANTSOMA: ‘OH MY WIFE, WHAT A MILESTONE’

IHarare reveals that viewers of the soapie Scandal! regard actor Mathews Rantsoma as Lindiwe Ngema’s husband Nhlamulo and can’t picture him having a “real wife” outside the show.

“Oh, my love… Oh, my wife! what a milestone! What an achievement!!! At least now you can teach our children all their subjects at school and I will teach them how to mess up the house. Am extremely proud of you… you have done it… well done caster.. well done!”, he captioned his Instagram post.

Rantsoma who just joined The Wife as Tsietsi and became a household name when he joined the e.tv soapie as Nhlamulo has been trending since his on-screen wife Nomvelo Makhanya exited the show Thursday after playing the role of Lindiwe for a decade.

“Mama’s is not even 3 days under lol you already have “my wife?”

“I’m disappointed 🥺🥺🥺🥺 you have a wife…..anyway congratulations.”

“So you have another wife that’s why you rushed to bury Lindiwe? 😢 Rip Malindi.”

“You are cheating on Malindi or it’s a matter of till death do us part.”