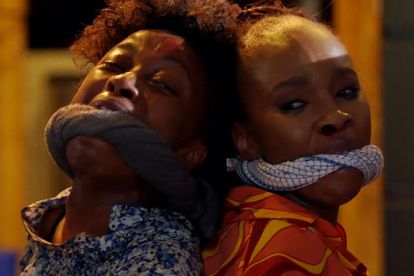 Scandal! viewers are relieved that Amo didn’t harm fan-favourite characters Hlengiwe and Dintle after holding them hostage for several days.

Viewers were left at the edge of their seats this week when Amo kidnapped his girlfriend and his former side chic and even attempted to murder them when they finally learned the truth.

DINTLE AND HLENGIWE MAKE IT OUT ALIVE

Amo (Kagiso Rathebe)surprised viewers of Scandal! this month when he turned into a psychopath and attempted to kill Hlengiwe and Dintle.

Dintle (Mapaseka Nyokong) found out that he kidnapped Hlengiwe, and was also held hostage when she went to her flat to find her.

There’d been red flags that showed that something isn’t right Amo when he couldn’t accept that his relationship with Hlengiwe had ended.

He started stalking her to make her paranoid and later kidnapped her when she refused to end her relationship with Dr Nyasha.

He also revealed to Hlengiwe (Nqobile Khumalo) that he and Dintle had an affair in 2021 which shocked Hlengiwe because she’s friends with her.

Dintle and Hlengiwe made it out alive and are recovering in the hospital!

The Scandal! TVSA May teasers do not mention Amo throughout the entire month as he’s still on the run.

The teasers also indicate that Dintle and Hlengiwe will try to make amends after Amo shared that he and Dintle cheated on Hlengiwe.

“Stokkies is the ‘not my monkey, not my circus” kinda guy. Way too passive.”

“I also think so… See how dangerous this is?? I don’t want to be that person, at least try to talk your friend out of doing horrible things!”

“Amo must suffer slowly and in pain.”

“Amo understood the assignment, he nailed the character very well, his character annoys a lot of viewers, while this storyline is conveying what is happening in reality.”

ALSO READ:‘Scandal!’ Review: Will Dintle or Dr Nyasha save Hlengiwe from Amo?