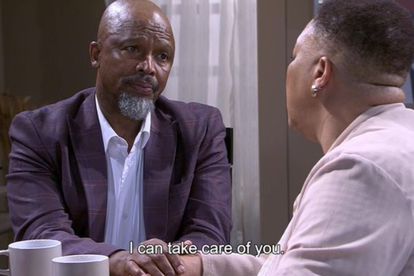 ‘WHY NTATE KGANYAGO IS A RED FLAG’

Fans of the educational soapie Skeem Saam can’t understand how an intelligent and educated woman such Jacobeth Thobakgale cannot see Ntate Kganyago for who he is. Viewers are also disappointed in her for choosing a man she just met over her daughter Elizabeth.

Jacobeth’s new man also convinced her to resign from Turfloop Hight so he can steal her retirement annuity.

Kganyago finally revealed he was a crook when he met his partner Luc at Lehasa’s restaurant in Johannesburg.

The soapie shared the Wednesday, 30 November teaser on social media, which reveals that Lizzy will realise that he’s hiding something from her mother and confront him.

Viewers of the educational soapie shared that Jacobeth’s boyfriend had to steal the real Kganyago’s identity to pull off the professor title at the university and fool everyone.

The Turfloop community will not suspect he’s after Jacobeth’s (Elizabeth Serunye) money because he appears to have his own, dresses well, and looks like he made it.

“But it would be wise and smart for Elizabeth not to make Kganyago to be aware that she is onto him. Because he is now going to cover his tracks.”

“Elizabeth must fight tooth and nail to protect her mother from Kganyago the scammer.”

“Imagine spending years single only to fall in love with someone who is on a mission to scam you.”

“That’s the reason why people don’t believe love exists these days, because they use it to scam.”

Tasty mince nachos with cheese, quac and all things delicious