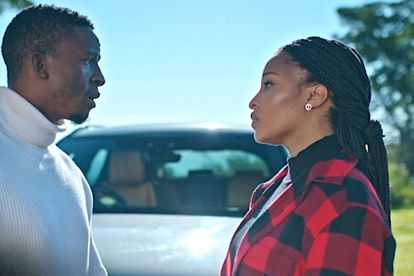 The River audiences are over rising star Tina Dlathu’s ‘bad acting’ and want the actress who plays the character of Khwezi to exit the 1Magic telenovela.

Viewers are also wondering why Tina, who is a younger sister to multi-award-winning actress Sindi Dlathu doesn’t do kissing scenes with Zolani played by award-winning actor and presenter Lawrence Maleka.

Viewers of The River took to social media to complain about actress Tina Dlathu’s acting skills and her awkward scenes with her love interest Zolani.

Fans demand to know if the actress got the role because of her sister Sindi Dlathu who is a producer and plays fan-favourite character Lindiwe Dikana-Dlamini on the show.

A viewer from the show tweeted:

“Is she not doing kissing scenes like her sister who plays Lindiwe?”

Seasoned actress Sindi Dlathu who hails from Muvhango doesn’t do kissing scenes with her husband Zweli played by Hlomla Dandala on the show.

Fans have much respect for the actress because she’s talented and always gives great performances in the characters she plays.

“Emma and Zolani are such good actors for them to be paired up with this Khwezi actress. I’m tired of her blank expression and no fire chemistry between her and her love interest.”

“It seems as if Lawrence is trying hard to give her a chance in their boring scenes. ”

“Zolani has no intention of leaving his marriage. Emma is Xhosa, and there’s no possibility of that Cobra situation with her. I am ready for the coming battle!”

“The Zolani and Khwezi scenes are not giving what they are supposed to give.”

“Problem is that she ain’t even that good at acting we’re still getting to know her and she can’t even show emotion.”

“Her face is just blank. We not even seeing reactions from these “almost kisses”. Not even a naughty look.”