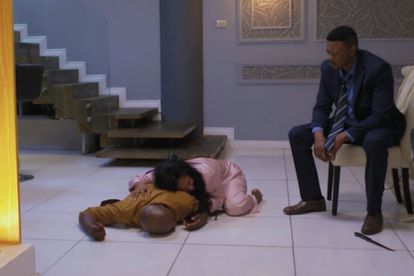 ‘I wanted him to suffer’: ‘Gomora’ viewers are unhappy with Phumlani’s exit. Image via Twitter @MzansiMagic

‘I wanted him to suffer’: ‘Gomora’ viewers are unhappy with Phumlani’s exit. Image via Twitter @MzansiMagic

Gomora viewers are upset with the way Phumlani died as they wanted him to pay for his crimes before getting killed by Melusi on Friday (22 April).

His death also marked an end to his love triangle with his wife – Thati (Katlego Danke) and his rival – Melusi.

Gomora viewers have taken to Twitter to express their disappointment with Phumlani’s death and exit storyline.

The telenovela’s most ruthless villain got shot and killed on Friday (22 April) by Melusi after an altercation ensued between them.

Thati also found out that Phumlani (Buyile Mdladla) is the reason her daughter Buhle (Ama Qamata) ran away from home.

Fans of the show were looking forward to Phumlani getting cancelled by the Molefes and the whole of Gomora.

They wanted cops to arrest him for tormenting Thati and pretending to be a good guy.

“Gomora rotates around one place man or should I say four people; Thati, Gladys, Melusi and Ntokozo.”

“Ay! too many killers in one soapie.”

“I hate that they’ve killed Phumlani before he was exposed.”

“I used to love this show but the writers really ruined it for this last season.”

“I was hoping that Phumlani would eventually be a good guy and end up marrying Gladys.”

“That’s not how I wanted Phumlani to die, I wanted him to suffer before dying.”

“But if Phumlani’s dead, will Buhle ever be found?”

“As annoying as Phumlani was but I didn’t want him to die like this, I wanted Mam’Sonto to learn about all the things he did then deal with him.”

ALSO READ:‘Gomora’ May Spoilers: Thati turns into a crime lord after Phumlani’s death