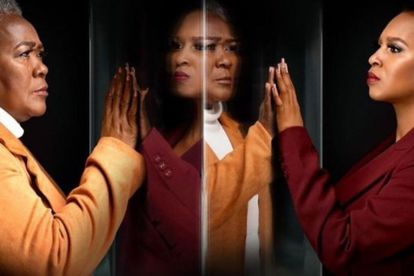 ‘Gomora’ May Spoilers: Thati turns into a crime lord after Phumlani’s death. Image via Twitter @Jabu_McDonald

‘Gomora’ May Spoilers: Thati turns into a crime lord after Phumlani’s death. Image via Twitter @Jabu_McDonald

Thati will turn into a monster like her mother – MamSonto according to the Gomora season three promo teaser and May teasers. Her character will change after Phumlani’s death and when her family takes her dead husband’s side over hers.

DStv’s most-watched telenovela – Gomora has been renewed for another season. The season three promo poster reads ‘Like Monster, Like Daughter’ with a picture of Thati and her mother – MamSonto. The May teasers also collaborate the season teaser and indicate that Thati will turn into a monster/crime lord.

The teaser indicates that Thati will turn into a monster like her mother in season one after Phumlani’s (Buyile Mdladla) death.

Season three will begin on Monday 25 April and the TVSA teaser reads:

‘Thathi is done with Phumlani.’

The Wednesday 27 April teaser indicates that Thati (Katlego Danke) will inform her family that Phumlani tried to kill her and that nobody will believe her.

‘Nobody believes Thathi and this devastates her.’

We already know that Phumlani will get killed as the 29 April teaser states that Thati will clean up after the murder. This also means that either Thati or Melusi would’ve killed him before she goes to her family’s house.

Melusi will also get arrested after Phumlani’s death and it is unclear if he and Thati will date after his death.

She is currently tied up by Phumlani in their penthouse but will break free. Phumlani also doesn’t appear in the May teasers.

MAY TEASERS: THATI TURNS INTO A CRIME LORD

The TVSA Gomora May teasers also indicate that Thati will turn into a crime lord like her mother and that the popular mother and daughter duo will clash throughout the month.

This is due to the Molefes not believing her when she told them who Phumlani was and what he did.

The Wednesday 4 May teaser reads:

Sonto (Connie Chueme) will only realise she was telling the truth when Stompie informs her that Phumlani was the one responsible for all the kidnappings and shooting in Gomora. Phumlani’s friend ‘ Mr M’ will also target the Molefes after his death and make their lives a living hell.

The Tuesday 31 May reads:

“Ma’Sonto struggles to get through her daughter. Thathi and the girls fix the streets”

ALSO READ:‘Gomora’ Review: Phumlani and Mazet are soulmates and love each other

PREDICTION: WHAT HAPPENED TO BUHLE?

Actress Ama Qamata – who plays the character of Thati’s daughter Buhle may have run away from home after finding out what Phumlani did and not kidnapped as viewers predicted. The actress was indirectly replaced by Thati’s stepdaughter- Gugu as the show needed her storyline to continue.

The actress is shooting Netflix’s Blood and Water season three in reality and had to take a break from the Mzansi Magic telenovela.

This is the second time she takes a break from the show, as she also took a break for season two when her character was sent to a boarding school in Cape Town in Gomora.