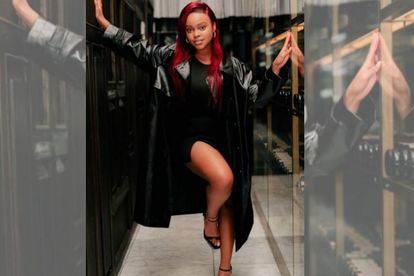 Actress Nandipha Khubone – who plays Sibongile in Gomora recently took to social media to open up about her struggle to remove herself from her character.

Khubone’s character is a high school learner who is currently in a relationship with a sugar daddy played by Aubrey Mmakola.

‘I STRUGGLE TO EXIT FROM SIBONGILE’

The Gomora actress Nandipha Khubone who plays Sibongile in the telenovela has been trending this month since her character got into a relationship with her sugar daddy who splurges on her through spa treatments, expensive hair, and nails.

The 22-year-old took to social media to discuss her character’s journey and how playing the role has made her confront situations that she swept under the carpet in her own life.

“Today I had a really insightful day at work that made me aware of the mental health in situations I haven’t dealt with head-on and as taxing as it was for my body I would like to share.”

She added that she was told about how hard it is to remove yourself from the character’s body when she was a film student.

“Removing myself from Sibongile’s body was harder than it usually was for me, because of how much I would like to shield her from a world that didn’t serve her.”

Khubone also says she broke down after her scenes in her green room during work.

“I had a few moments of breaking down in my green room due to the work I had prepared.”

“Before the scenes started, I had done my normal meditations, but nothing could have prepared me for the moments in time when I was present.”

The actress is a New York Film Academy alumni who already fell in love with acting when she was in primary school.

In an interview with True Love magazine Khubone told the publication that she went through several auditions until she got the role in the Mzansi Magic telenovela.

“I matched the character description and I submitted my audition tape by myself and it wasn’t seen, so I sent it again through my manager and it was seen by the producers.”

“They then called me right away and told me it was a done deal. We went in for one more round and it was history after that.”

Khubone said in the interview that she’s not bratty, spoiled, and disrespectful like her character. The only thing she has in common with her character is that they are both young girls who are trying to figure life out.

She aims to become a household name where people can differentiate between Nandipa the actress and the characters she plays.