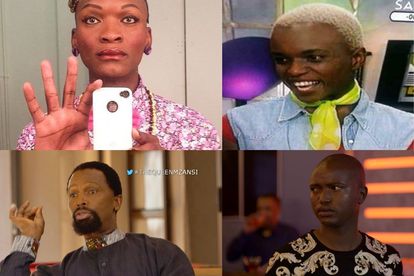 Some members of the LGBTQIA+ believe that gay roles should be kept for queer actors, while others believe that actor should be able to play any character they’re assigned.

Warren Masemola stole the show on SABC 1’s sitcom, Ses’Top La, where he played the role of a gay man, Thoko Chanel.

Viewers of the show called his performance “winning” while others stated that the show belonged to Masemola.

The four-time South African Film and Television Award (SAFTA) winner won a SAFTA for his gay role and is also a two-time DStv MVCA winner, and a two-time Naledi nominee.

Black Brain Pictures confirmed the show is returning to our screen towards the end of 2021 on SABC 1.

Straight actor, Themba Ndaba, who currently plays the role of a homophobic man on Mzansi Magic’s, The Queen took on a flamboyant gay role on SABC 1’s comedy show, Streaks in the 1990s.

Viewers still recall Ndaba’s gay hairdresser character with his glossy lips, bleached hair, and a silky, feminine scarf around his neck as the show still airs on SABC 1 today (November 2021).

“You know, I always used to cover my hair with a hat when I went outside because my hair had to always be peroxide blonde.”

“That character was really flamboyant.”

“The hard part wasn’t channeling this gay character, it was walking the streets afterwards.”

SELLO MAAKE KANCUBE ON ‘THE QUEEN’

With some viewers even calling it “the performance of his career” and others labelling his character “refreshing” on the show.

The actor exited the telenovela in 2018 and returned in April this year (2021) with his on-screen daughter, Olerato played by Lorraine Mothapo.

Leremi stated in an interview that viewers of the show often assume that he is gay in real life as they can’t separate the actor and the character.

His role stole viewers’ hearts this season when he came out as gay to his family members and got his heartbroken by a married man.