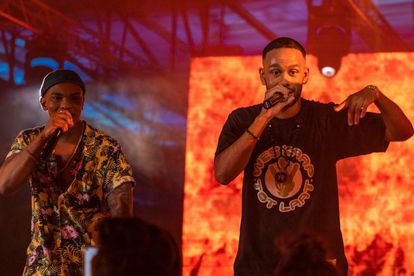 Season two of the Netflix African Original series Blood & Water premiered on Friday 24 September and one of its prominent features is its soundtrack to which Cape Town rapper and hip-hop muso YoungstaCPT has added his award-winning touch, among other artists, such as pop star sensation Tyla, Costa Titch, Kabza De Small and AKA.

Riyadh Roberts, popularly known as YoungstaCPT, is a brilliant hip-hop lyricist who has taken South Africa by storm with his lyrical illustrations of Cape Town in his music.

YoungstaCPT began rapping professionally in 2012 after completing high school, and over time he has grown to become part of South Africa’s small pool of impactful lyricists who deliver quality lines in their music.

The 29-year-old rapper’s 2019 album, 3T, earned him the Album of the Year award at the 2019 South African Hip-Hop Awards. The 22-track album focuses on themes of gangsterism, poverty and drug use.

The heavyweight rapper will also be making his appearance in the second season of Blood & Water as a friend of Zero (played by Nasty C in season one).

YoungstaCPT swoops in to save the day by helping KB (Thabang Molaba) produce and perform a song at a fundraising event put together by Wendy (Natasha Thahane) and Chris (Arno Greeff).

In the song, titled Gaslight, KB shows his jealousy of Puleng (Ama Qamata) and Wade’s (Dillon Windvogel) relationship and he also reveals that he and Fikile (Khosi Ngema) shared an intimate kiss in season one after a party at KB’s house.

TYLA ADDS SOME SPICE TO THE SOUNDTRACK

Tyla Seethal, popularly known as Tyla, first appeared on the South African music industry’s radar in 2019 when she released her hit debut single featuring Kooldrink, Getting Late. After breaking boundaries as an independent artist, she then signed a global deal with Epic Records.

Although the 19-year-old pop star will not be making an appearance in the second season of Blood & Water, she has made a stellar contribution to the soundtrack.

Tyla teamed up with DJ Lag (who is regarded as the pioneer of gqom) and Kooldrink for a new single, titled Overdue. The feelgood music video sees Tyla wearing a school uniform in tune with the Netflix African Original series.

The Blood & Water season two playlist features a sensational line-up of a host of other artists.

From songbird Ipeleng to energic rapper Costa Titch, the soundtrack shows off all the hot talent South Africa has to offer. The exciting part about the season two playlist is that it features rising local artists who are sure to make their mark in the music industry.