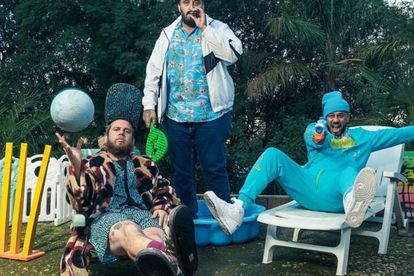 YoungstaCPT and Jack Parow are two of the most popular music acts in the country. With their smooth flows and catchy lyrics, they are at the top of the hip-hop game. The two rappers teamed up with Middelvinger on their new single Innie Boland. As per The Citizen, the three artists described the track as an “upbeat hip-hop anthem that is made for those days when the sun is shining”.

In a statement sent to The Citizen, YoungstaCPT explained that the song is about having a great time with your friends in the Boland in Cape Town.

“People always think you need to spend a lot of money travelling overseas and going out to fancy resorts to have a lekker time, yet you can enjoy yourself with a simple road trip up to the Boland,” explained the 28-year-old rapper.

HOW DID THE COLLABORATION COME TOGETHER?

YoungstaCPT, who is best known for his lyrical flows and as a “voice of the Cape”, said the collaboration between him and Middelvinger had been a long time coming.

Middelvinger is also a good friend of Jack Parow’s and the three came together and instantly created magic.

YoungstaCPT and Raf Don explored Cape Town’s sneaker culture in their collaboration, Tekky, which was officially released on 24 June.

“Youngsta and I wanted to find a way to connect with people from different cultural backgrounds, races and classes and this was the perfect way to do that because of the common love and interest in sneakers, which also inspired the title of the song by using the colloquial term Tekky,” said Raf Don of the single.