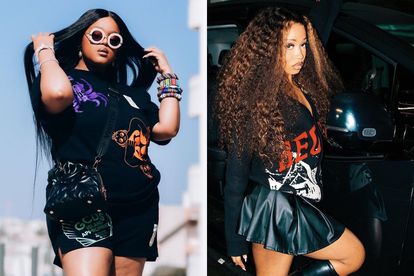 DBN Gogo and Uncle Waffles set the crowd on fire at the Afro Nation festival in Portugal. Images via Twitter @DBNGOGO @unclewaffffles

DBN Gogo and Uncle Waffles set the crowd on fire at the Afro Nation festival in Portugal. Images via Twitter @DBNGOGO @unclewaffffles

Since becoming a viral sensation in October 2021, Uncle Waffles has performed at music festivals and popular venues in Ghana, Kenya, London, Dublin and several other countries.

The Tanzania hitmaker was one of the few amapiano acts on the Afro Nation lineup. Uncle Waffles performed at the three-day festival on Saturday 2 July and wowed the crowd with her DJ skills and stage presence.

Taking to Instagram on 3 July, she wrote: “Thank you Afro Nation. Thank you Portugal.”

Not only did they hit the stage to perform, but the amapiano stars mingled with some of the headliners who were at the event. DBN Gogo and Moonchild Sanelly rubbed shoulders with Nigerian muso Davido.

Nigerian star Burna Boy closed the Afro Nation festival on Sunday 3 July with some of his biggest hits including his new single, Last Last. Festival-goers posted snaps of the Grammy winner’s performance and others praised his stage presence.