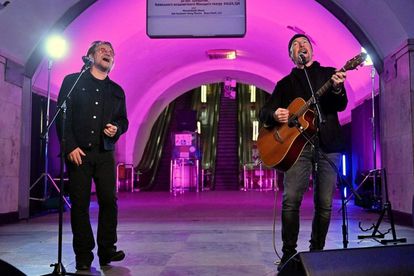 Bono and The Edge were invited by Ukrainian president Volodymyr Zelensky to perform at a bomb shelter in Kyiv. Image via Twitter @Anabel_Villeroy

Bono and The Edge were invited by Ukrainian president Volodymyr Zelensky to perform at a bomb shelter in Kyiv. Image via Twitter @Anabel_Villeroy

Thousands of Ukrainian civilians have lost their lives following Russia’s heart-wrenching invasion of the eastern European country that began on 24 February. Musicians all over the world have shown their support to Ukraine with unique remixes of popular Ukrainian songs or by urging their millions of social media followers to donate to the Ukrainian armed forces.

Bono and The Edge from legendary rock band U2 had a special intimate performance in Ukraine’s capital at a bomb shelter. Taking to Twitter on Saturday8 May, the two rock legends shared that they were invited to perform by Ukrainian president Volodymyr Zelensky to perform a 40-minute set.

U2 SHOWS THEIR SUPPORT FOR UKRAINE

Taking to Instagram on 8 April, Bono and The Edge first showed their support for Ukraine in a heartwarming post. The rock legends posted a three-minute video of themselves singing their track Walk On.

They captioned the video: “World leaders must stand up and stand by Ukrainians now… those who are fighting and those who have fled… and stand with refugees everywhere who have been forced from their homes and their lands.”

BONO AND THE EDGE’S PERFORMANCE AT KYIV BOMB SHELTER

Bono and The Edge performed a 40-minute set at the Khreshchatyk metro station on Sunday 8 May in Kyiv as they offered their support to Ukraine while Russia was invading the country. As per The Independent, approximately 100 people attended the performance including some members of the Ukrainian army.

The two rock legends played several songs including their iconic hits With Or Without You, Desire, Angel of Harlem and a version of Ben E King’s Stand By Me with a Ukrainian singer turned soldier, Taras Topolia.

As per NPR, Bono also shared some kind words with a small audience.

“The people in Ukraine are not just fighting for your own freedom, you are fighting for all of us who love freedom.”

“We pray that you will enjoy some of that peace soon.”

“Such a historical moment to show solidarity and pay global attention on Putin’s invasion,” wrote one tweep.

“Just got back from a deeply inspiring peace concert in Ukraine by Bono and U2, “ wrote another tweep.

Man, 60, sentenced to LIFE after attempting ‘ukuthwala’ on girl, 17