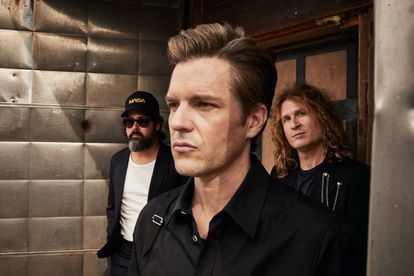 The Killers’ ‘Pressure Machine’ album is inspired by the pandemic. Image via Twitter @diymagazine

The Killers’ ‘Pressure Machine’ album is inspired by the pandemic. Image via Twitter @diymagazine

The Killers‘ latest was inspired by the COVID-19 pandemic.

THE KILLERS’ LEAD SINGER ON REFLECTING

“The pandemic has allowed everyone more time for a lot of reflection and I was not spared from that. This album definitely began to bloom out of that. We weren’t hoping or setting out for chart-topping success, but we’ll take it.”

“You still want people to like it and be affected in a positive way. And I still have that Bono in me that wants to be on the radio. And that’s always gonna be there. I had a vision for this record and we tried to stay true to that.”

THE KILLERS’ LINE-UP IS A ‘REVOLVING DOOR’

The acclaimed singer-songwriter – who shot to fame along with his bandmates almost 20 years ago and is now father to Ammon, 14, Gunnar 12, and Henry 10, with wife Tana Mundkowsky – explained that these days the line-up in the band is something of a “revolving door,” allowing for them to take on other projects as well as manage family life.

“Dave’s been playing most of the gigs this year which has been great. It’s sort of a revolving door situation, which is, so far, so good. We were able to get our schedules to align and do what we could do.”

“When you’re first in the band nobody has anything tying them down and you become a gang. Then people start having families and moving to different states and it gets difficult. But I think we’re making it work in a unique way.”