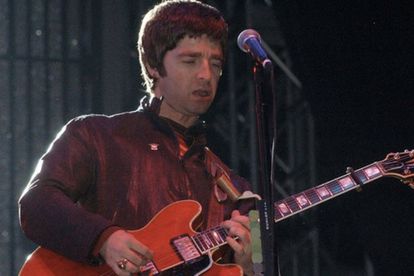 Noel Gallagher’s Gibson guitar, which was broken in 2009 at the same time as the British group Oasis imploded, sold for 385 500 euros at an auction in Paris on Tuesday. Image via Twitter @hypebeast

Noel Gallagher’s Gibson guitar, which was broken in 2009 at the same time as the British group Oasis imploded, sold for 385 500 euros at an auction in Paris on Tuesday. Image via Twitter @hypebeast

Noel Gallagher’s Gibson guitar, which was broken in 2009 at the same time as the British group Oasis imploded, sold for 385 500 euros (R6.4 million) at an auction in Paris on Tuesday.

Later repaired, the red Gibson’s destruction at the French capital’s Rock en Seine festival in 2009 was “a cult moment” in music history, said Jonathan Berg, a guitar expert and co-founder of the Artpeges gallery that held the auction.

ALSO READ: Noel Gallagher’s guitar that broke Oasis up will be auctioned in Paris

THE STORY BEHIND THE AUCTIONED OASIS GUITAR

A flagship of the 1990s Britpop movement built around the notoriously fractious Gallagher brothers, Oasis scored global success, selling 60 million albums and birthing hits like Wonderwall and Don’t Look Back In Anger.

The band had been slated to play at Rock en Seine in 2009 towards the end of their year-long Dig Out Your Soul global tour – named for their album of the same name.

But “things had been brewing for a while between the two brothers,” Berg said.

“It exploded backstage, one of Noel’s guitars got broken and that led to the group breaking up.”

THE DRAMATIC SPLIT OF OASIS

An eager crowd waiting for the pair to appear were stunned to get the message that Oasis was history.

The dramatic split set off years of public barbs between the brothers via the press and social media that have gradually cooled off.

Both have continued making music since they parted ways, but have repeatedly ruled out getting Oasis back together.

The guitar, restored in 2011, was presented with its original case and a note from its former owner, signed “Peace, love and bananas”.

Arthur Perault, another co-founder of Artpeges, said he was “pretty happy” with the session.

Among the other top lots, a bondage suit made entirely of leather and chains worn by Martin Gore of the British group Depeche Mode, matched the top-end estimate, finding a buyer for 15 528 euros (R260 066) including tax.

A rare vinyl signed by both Jimi Hendrix and beloved French rocker Johnny Hallyday sold for more than 10 000 euros (R167 456).

A total of 85 lots were on offer on Tuesday at the Hotel Drouot, the main Paris auction site, including 1960s amps, silkscreen prints of Pink Floyd albums and photos of rock stars.