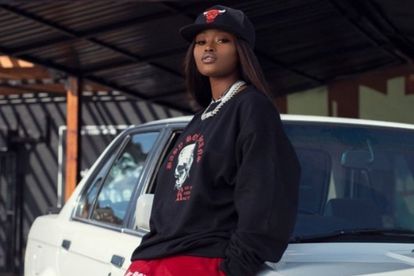 Local rapper Nomfundo Yekani blew Mzansi away with her hip-hop bars during a guest appearance on MacG’s Podcast and Chill on Monday 16 May. Yekani quickly trended on Twitter after her appearance and now her fans are hoping she gets her big break!

NOMFUNDO YEKANI ON ‘PODCAST AND CHILL’

Nomfundo Yekani joined MacG and his co-hosts Sol Phenduka and Ghost Lady on Podcast and Chill to talk about the nightclub industry and her rap career.

Yekani, who is a former nightclub hostess, explained the ins and outs of the clubs and also spoke about seeing celebrities. She recalled that hip-hop star Okmalumkoolkat pulled in a large crowd during one of his performances.

She explained that she is now diving into music as a rapper and stunned the presenters with her hot bars!

Taking to Twitter, tweeps have praised Nomfundo Yekani’s rap skills after seeing her on Podcast and Chill.

One tweep wrote: “Nomfundo Yekani is that girl she thinks she is. She can take over SA rap as a female any day.”

“Nomfundo Yekani is really the woman she thinks she is. MoGal went on the podcast and did not say anything that would tarnish [her] reputation/name and sis delivered BARS,” wrote another tweep.

“Nomfundo Yekani definitely has something to offer.”

WHAT’S NEXT FOR NOMFUNDO?

Taking to Instagram, Yekani expressed that she was humbled by the invite to be a guest on Podcast and Chill. “I couldn’t believe it,” she wrote.

The rising hip-hop star also caught the attention of music executive Nota Baloyi who commented on her Instagram post.

When a fan asked that he sign her, Nota responded: “I don’t do that, but I can plug her!”