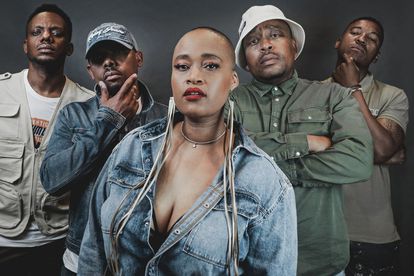 Skwatta Kamp returns to music with their new single ‘In The Name Of Love’. Image via Twitter @Skwattakamp

Skwatta Kamp returns to music with their new single ‘In The Name Of Love’. Image via Twitter @Skwattakamp

New Music Friday is back with a jam-packed list of new local and international releases. Legendary hip-hop group Skwatta Kamp has returned to the music scene 12 years later with a new single titled In The Name Of Love. Gqom pioneer, DJ Lag collaborated with several local stars on his 15-track album, Meeting With The King.

Take a look at all the New Music Friday releases.

DJ LAG – ‘MEETING WITH THE KING’

DJ Lag has worked with some of the biggest musicians in the world including 28-time Grammy winner Beyoncé and Moonchild Sanelly. For his new album, Meeting With The King, the gqom pioneer kept it local with features from Amanda Black, Babes Wodumo, Dladla Msunqisi and amapiano vocalist Lady Du.

Since his debut album, B4now, Blxckie has always delivered quality releases and his new six-track EP is no different. 4Luv explores the rollercoaster of love. The EP only features muso Nicole Elocin who commands attention with her vocals on fortune teller.

English singer-songwriter JP Cooper has released his second album She. The heartfelt album is a tribute to all the women who have influenced him throughout his life. The opening track Holy Water is a fusion of gospel and jazz.

Singer-songwriter Aubrey Qwana and Tha Maniac DJ have released their debut EP, Amagalelo. The EP is a genre-bending project with hints of maskandi, hip-hop and isicathamiya, a style of music that originates from the Zulu culture. The five-track EP features vocalists Musiholiq, Mnqobi Yazo and producer Ali Keys.

For her debut EP, Emoyeni, local songstress Nicole Elocin roped in the best of the best. She featured star producer Tyler ICU and vocalist Bassie. Previously, Elocin has worked with the likes of Kabza De Small, DJ Maphorisa, Mas Musiq, Vetkuk and Mahoota.

SKWATTA KAMP ‘IN THE NAME OF LOVE’ FEATURING AEWON WOLF

Local hip-hop group Skwatta Kamp has returned to the SA music scene more than a decade after their last release. The hip-hop heavyweights featured Durban-based rapper Aewon Wolf on their new single In The Name Of Love. The single is the first off their upcoming album, SVN, set to be released on 1 July.

American rapper Jack Harlow has released his first single for 2022 titled Nail Tech. The single is his first solo single since his 2020 album, That’s What They All Say. The single comes after he stunned on Lil Nas X’s Industry Baby last year.

WARNING: Man shot in legs and buttocks by fleeing robbers