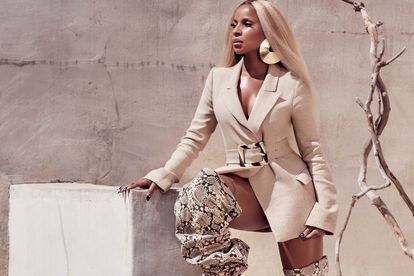 American R&B star Mary J Blige kicks off New Music Friday with the release of her 15th studio album, Good Morning Gorgeous. Blige is set to perform at the highly-anticipated Super Bowl halftime show on Sunday 13 February, alongside the likes of Kendrick Lamar and Eminem.

Other stand-out New Music Friday releases include SA hip-hop stars, Nasty C and Blxckie, who explored the difficulties of love in their new tracks.

The nine-time Grammy Award winner featured the likes of DJ Khaled, rapper Dave East and R&B giants Usher and Anderson Paak on her 13-track album. Her collaboration with Anderson Paak, Here With Me, shows off their flawless chemistry.

It’s the month of love, so why not add this classy R&B track to your playlist.

LISTEN TO ‘HERE WITH ME’

British singer-songwriter Joss Stone returns to the music scene with an R&B-inspired album titled Never Forget My Love. The 34-year-old musician has been absent from the music scene since 2019.

Speaking about Never Forget My Love with the DailyMail, she said fans should “think long gloves and a dress.”

British indie rock band, Alt-J released their fourth album, The Dream. The band began working on the album in January 2020 but due to the COVID-19 pandemic, they had more time to explore their creativity.

Local rapper SimulationRxps has made quite the name for himself in the SA hip-hop industry. The rapper has previously collaborated with other rising stars, Bravo Le Roux and Dee Koala.

Taking to Instagram, the Xhosa rapper said he was nervous for the world to hear his debut, Live From Elokshin, but also excited.

ED SHEERAN FEATURING TAYLOR SWIFT – ‘THE JOKER AND THE QUEEN’

Grammy Award winners Ed Sheeran and Taylor Swift teamed up for a love ballad titled, The Joker And The Queen. The song is a remix of Sheeran’s sixth track on his album, = (Equals).

In the spirit of Valentine’s Month, Nasty C is exploring the difficulties of love in his new single Stalling. In the slowed-down hip-hop song, the award-winning rapper says: “You can just leave if you wanna leave.”

Much like Nasty C, rapper Blxckie also navigates love in his single Cold. “Can’t believe that we came so far. Baby, we go so hard,” raps Blxckie.

Cold is something like a love letter to his significant other.

Rising songstress Jessica LM has released her first solo single of 2022 titled Juba Lami. The powerful vocalist teamed up with produce Woza Sabza for this local release. The high-energy afro-soul-inspired song is the perfect way to welcome the weekend.

Covid-19 vaccines to be an annual thing

‘Eskom’ is back! Jake White thrilled with Springbok signing