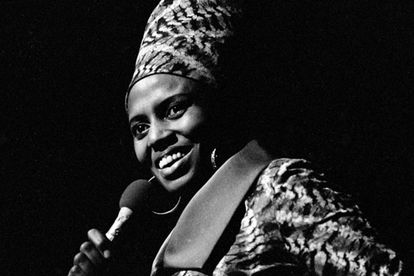 Miriam Makeba’s granddaughter Zenzi will honour her grandmother with a concert in Johannesburg on Friday 27 May. Image via Twitter @UBMontaigne

Miriam Makeba’s granddaughter Zenzi will honour her grandmother with a concert in Johannesburg on Friday 27 May. Image via Twitter @UBMontaigne

South African singer-songwriter and activist Miriam Makeba was one of the most impactful artists in the world. The talented singer, who would have celebrated her 90th birthday on 4 March this year,  stunned the world with exceptional releases like Pata Pata, Lakutshon Ilanga and Qongqothwane (The Click Song).

Makeba’s granddaughter, Zenzi, will honour her grandmother with a tribute show on Friday 27 May at the Leano Restaurant & Live Music in Braamfontein, Johannesburg.

Zenzi Makeba told TshisaLive that she was always on tour and backstage when her grandmother was performing for thousands of people.

“The legacy is something I was born into. The show is the journey of my own life of music I heard, not just her songs, but my mother and grandmother too.”

“We’re threading the old and the new to tell a story. It’s really from the heart. The point is for them to remember in love and respect,” said Zenzi.

ZENZI ON CONNECTING WITH HER GRANDMOTHER

She added that singing helps her connect with her mother and grandmother and reminds her that their spirits still live on.

“[It’s] more than just a legacy, it’s about keeping those spirits alive and us learning from those spirits so we can impact on to the next generation. Music is about sharing, so I hope everybody feels that energy.”

Zenzi plans to perform some of her mother and grandmother’s music at her performance in Johannesburg on 27 May.

Zenzi Makeba’s concert on 27 May is one of many tribute concerts planned to celebrate the anniversary of Miriam Makeba’s death on 14 November.

Tickets for the concert at Leano Restaurant & Live Music are R300 each.