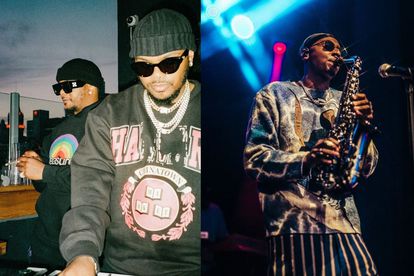 Will.i.Am and now Masego… Major League DJz are slowly growing their international features list and they seem to be hitting all the right notes. Jamaican-American R&B artist Masego posted a clip on his Instagram stories with the twin brothers in studio and there’s hope that a collaboration could be on the way.

After rocking the United Kingdom, Major League jetted off to the United States where they had gigs in New York and Los Angeles.

The Dinaledi hitmakers also got together with Major Lazer for an amazing Balcony Mix. The brothers recorded the Balcony Mix from Malibu, California and had everyone dancing to their exclusives.

“WE DO IT FOR THE KULTURE… WE GOING B2B WITH OUR BIG BROS MAJOR LAZER,” wrote the brothers.

MASEGO AND MAJOR LEAGUE DJZ LINK UP IN STUDIO

Micah Davis aka Masego has always shown his appreciation for South African music. The multitalented star shared that he came across the name Masego after exploring his family’s roots in South Africa.

The 28-year-old musician shared snaps while in the studio with Major League DJz and even whipped out his saxophone for the session. Rap duo Earthgang were also in the studio.

This comes after Masego collaborated with Scorpion Kings Kabza De Small and DJ Maphorisa on an amapiano remix of his track Mystery Lady.

Check out the snaps!

Among the 54 artists from across the globe selected for the programme, eight are from Nigeria, South Africa and Kenya.

The DJs shared that the funding from YouTube will ensure that they continue their trajectory to take amapiano to the world.

“We will continue to travel and immerse everyone and anyone who crosses our path in this beautiful sound.”

Newspaper front pages from around the world, Monday, 04 July 2022