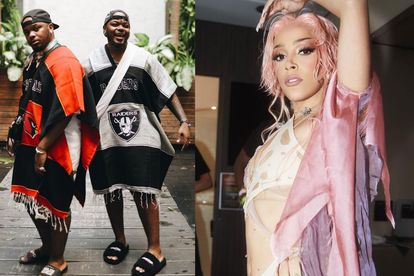 When they said, “amapiano to the world” they meant it! Superstar DJs Major League DJz are living it up in the United States and have hinted that they’ll be bringing home a track with American superstar Doja Cat. The Dinaledi hitmakers also rubbed shoulders with Metro Boomin who has worked with several big names in hip-hop including Drake!

Twin brothers Bandile and Banele Mbhere aka Major League DJz have dedicated their 2021 to travelling the world and showing them what amapiano is all about. The brothers have travelled to Ghana, Nigeria, the Netherlands and the United Kingdom and playing amapiano.

The brothers headed to the United States to record their famous Balcony Mix Africa with Major Lazer and Diplo was on the decks with them!

They returned to South Africa for a brief moment before returning to the United States. The brothers met up with South African artist Nelson Makamo who is currently exhibiting his artwork in Los Angeles.

MAJOR LEAGUE LINK UP WITH DOJA CAT AND METRO BOOMIN

The amapiano superstars took to Twitter on Tuesday 16 November to share that they have a track with Doja Cat! Major League did not reveal much about the collaboration but already has us excited for the release!

“Bringing a record home with Doja… Piano to the f*cken world.”

Major League also shared that they got to rub shoulders with award-winning producer Metro Boomin. The 28-year-old producer has worked with the likes of Kanye West, Drake, Ty Dolla $ign and Travis Scott.

Sharing the image on Instagram Major League DJz wrote: “Brick by brick. PIANO TO THE WORLD.”

One tweep wrote: “Big Shout Out to Major League DJz for being super major.”

Another wrote: “Nobody is pushing piano the wayy Major League DJz be doing !!!! & that’s on PERIODTTTTT.”