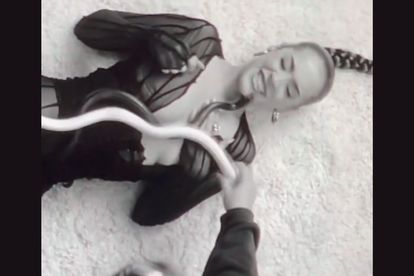 American R&B singer Maeta was bitten by a snake during a music video shoot. Image via Instagram @maetasworld

American R&B singer Maeta was bitten by a snake during a music video shoot. Image via Instagram @maetasworld

When it comes to music videos, some artists are willing to go the extra mile to make sure theirs stands out above the rest. While filming a music video, American singer Maeta got the shock of her life when a snake sunk its teeth onto her chin…OUCH!

R&B songstress Maeta was shooting a music video recently when things took a slithery turn. The Roc Nation signee was lying down on the carpet ready for a take with one snake already on her body.

While patiently waiting for the snake handler to place the second snake on her, the first one bites the 20-year-old singer on the chin.

She shared the five-second clip on Instagram writing: “What I go through to make videos for y’all.”

‘HOPE THEY AT LEAST GOT A DECENT SHOT’

Taking to Twitter to react to the video, tweeps had some humorous comments about the incident.

One tweep wrote: “Oh hell no. You’re a trooper… Hope they at least got a decent show.”

Another wrote: “The snake said oh look a snack.”

“The suffering for art”.

Maeta is signed to Jay-Z’s Roc Nation label alongside the likes of Lil Uzi Vert, Rihanna, Snoh Aalegra, Vic Mensa and Willow Smith. Since her rise in the music industry, Maeta has worked with the likes of Canadian producer Kaytranada, and hip-hop star Mustard.

She released her debut EP, Habits on 30 April which featured Buddy, Levan Kali and Beam.