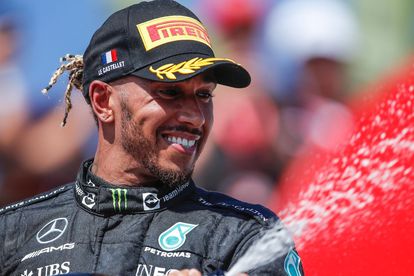 Lewis Hamilton has said he hopes to sign a new multi-year contract with Mercedes and continue racing in Formula One into his forties. Image via Twitter @LewisHamilton

Lewis Hamilton has said he hopes to sign a new multi-year contract with Mercedes and continue racing in Formula One into his forties. Image via Twitter @LewisHamilton

Amapiano has risen to become one of South Africa’s most successful genres and even the international music community has caught on! British racing driver Lewis Hamilton is the latest celebrity to jam along to amapiano. The Formula One driver posted an Instagram reel which was accompanied by one of Mzansi’s most popular tracks.

Judging by his Instagram reels, Lewis Hamilton is always up to date with the latest tracks dominating the world’s music charts.

In an Instagram reel posted on Monday 25 July, the Mercedes driver put together a reel from his high-intensity weekend at the French Grand Prix where he placed second behind Red Bull’s Max Verstappen.

The 37-year-old captioned the post: “Whole weekend in one minute.”

Some of Lewis Hamilton’s South African fans gathered in the comments to praise his use of Musa Keys’ amapiano banger. Cassper Nyovest, Major League DJz and Boity all responded with heartwarming emojis.

@bongekaxala wrote: “You have to come to South Africa pls”.

@leboramp03 wrote: “Yohhh it’s the song you used for me.”

Taking to Instagram on Tuesday 26 July, Lingard praised Uncle Waffles’ skills on the decks after she rocked a roaring crowd while in Amsterdam.

The footballer wrote: “Need Uncle Waffles at my birthday for real for real.”