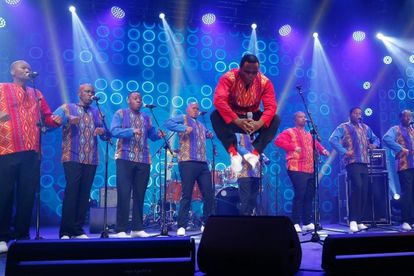 Ladysmith Black Mambazo will honour former president Nelson Mandela and the founder of the male choral group, Joseph Shabalala, at a concert on 17 July. Image via Twitter @joburgtheatre

Ladysmith Black Mambazo will honour former president Nelson Mandela and the founder of the male choral group, Joseph Shabalala, at a concert on 17 July. Image via Twitter @joburgtheatre

ALSO READ: Do what you can this Mandela Day

Sibongiseni Shabalala told The Star that Ladysmith Black Mambazo’s concert at the Joburg Theatre will celebrate Joseph Shabalala and Nelson Mandela for their contribution to where South Africa is now.

Shabalala added that Ladysmith Black Mambazo would perform memorable songs at the concert including Long Walk To Freedom, a song that was dedicated to Nelson Mandela for being the first democratically elected president of South Africa.

MANDELA DAY CONCERT TO BE BROADCAST ON BET AFRICA

Ladysmith Black Mambazo’s Concert is set to be broadcast on BET Africa at a later stage.

Tickets for the concert are available on Web Tickets for R250 each. The concert will kick off at 15:00 Sunday 17 July.

ALSO READ: Mandela Day: A look inside Mvezo and Qunu, where Madiba grew up [photos]

Ladysmith Black Mambazo has scored a feature on Burna Boy’s upcoming sixth studio album, Love, Damini, set to be released on 9 July. The choral group are featured on the intro and outro of the album.

Speaking to TshisaLive, Sibongiseni Shabalala said: “The people who listen to Burna Boy’s music will discover Mambazo, same as it happened with Paul Simon with his recent album so we’re going to reach new fans.”