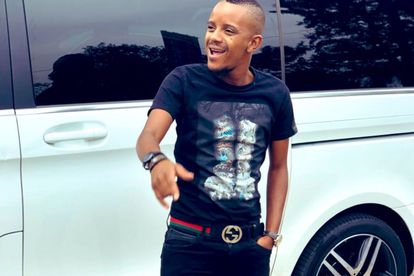 Kabza De Small is one of the bright minds behind the global success of amapiano, but he has not always been in the music industry… The 29-year-old DJ started out by cutting grass before finding success in his music career. The Abalele hitmaker said: “it was tough”.

King of amapiano Kabza De Small has come a long way. The multi-award-winning producer sat down with DJ Maphorisa in a series titled Crowning Moments with Black Crown Gin to discuss their rise as amapiano artists.

The two kicked off their conversation by asking each other what they used to do before getting into music. Kabza De Small mentioned that he used to cut grass for a living. “I used to work for the municipality,” he added.

“I used to wear overalls, it was tough.”

“I was a plumber. I used to fix sewage drains,” he mentioned.

The star producer also mentioned that he was around 17 or 18 years old at the time.

‘WE ALL START SOMEWHERE’

The clip was reposted by blogger Musa Khawula on Twitter and sparked several responses from Mzansi tweeps. Many praised Kabza De Small with one tweep writing: “We all start somewhere.”

Another wrote: “They deserve all their fortune man.”

Kabza De Small released his album I Am the King of Amapiano: Sweet & Dust in June 2020. The album broke several Apple Music records and is still one of his strongest album releases to date. The album featured Focalistic, Daliwonga and Nigerian artists Burna Boy and Wizkid.

The star producer is gearing up to release King of Amapiano volume two and has already shared a few teasers on his Instagram page.

HERE’S WHAT TO EXPECT