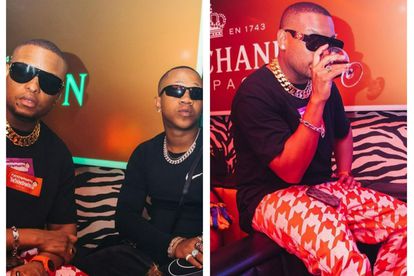 K.O Sete Young Stuna Blackie are still enjoying the joys of having a hit song. Images via Instagram: @mrcashtime

K.O Sete Young Stuna Blackie are still enjoying the joys of having a hit song. Images via Instagram: @mrcashtime

Award-winning rapper K.O has encouraged artists to keep doing what they are doing, things will eventually look up for them.

The rapper released a statement that Timeslive has and said, “I…want to share a message an encouraging message to the upcoming artist out there , don’t ever give up on yourself, keep doing what you love and put God first. Bless!”

On Friday 25 November, K.O received a plague for hitting 10 million streams since the song “Sete” was released in August.

“Yezuur, thank you so much to the Sony Team and of course my team. Thank you to Stunna, Blxckie and all the contributors, today is a monumental day, receiving a plaque for 10 million streams was something I didn’t forsee coming,” the Cashtime records founder said.

According to the publication, Radiomonitor South Africa announced the news on Instagram.

“K.O, Young Stunna and Blxckie’s SETE becomes the first ever song (local or international) to stay in the #1 position for 12 consecutive weeks on the official @radiomonitorsa airplay chart. Congratulations on a new record! #k.o #youngstunna #blxckie,” they said.

K.O also took to Twitter to celebrate the success of the song. he also admitted that he thought “Caracara” was his biggest song.

“Thought Caracara was my biggest moment, God said hold up big dawg! #SETE #1 across all platforms n radio at the same time, crossed double plat on Saturday! Most viral on SA TikTok with no challenge? Video 5 mil in 3 weeks!? #SR3 sitting at #1. When the blessings rain they pour,” he said.