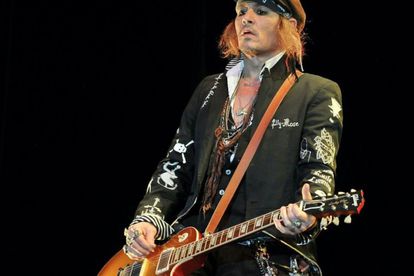 Besides being a star actor, Johnny Depp has collaborated with some of the biggest musos in the world. Image via Twitter @MusicRadar

Besides being a star actor, Johnny Depp has collaborated with some of the biggest musos in the world. Image via Twitter @MusicRadar

Shortly after his high-profile trial against his ex-wife Amber Heard, American actor Johnny Depp jetted off to London for a few performances alongside English guitarist Jeff Beck. Besides a blooming acting career, Depp has had an exciting musical career playing with some of the biggest bands including.

Speaking to The Daily News in 2016, Johnny Depp said he had been a musician since he was 12 years old.

“It seemed like a good way to pay the rent for a minute,” he added.

According to Slate, Johnny Depp dropped out of high school in Florida to pursue a career in music with his band The Kids and opened for the likes of Iggy Pop and American rock band Talking Heads.

After moving to Los Angeles in hopes of a big break, he decided to try acting after being advised by his first wife Lori Anne Allison and Nicholas Cage.

In 1986, the award-winning actor joined glam rock band Rock City Angels as a guitarist and scored a writing credit on their track, Mary.

LISTEN TO THE TRACK HERE

In an interview with Louder Sound in 2016, Depp said he had always written music but never thought his words fit with the music.

“I just f*cking hated the idea of doing love songs and sh*t like that, or at least love songs where, you know, they begged for sympathy and all that sh*t.”

“So, I was fighting desperately against that kind of thing and I learned a lot, trying to stay away from other people’s formulas,” he added.

In 2000, the 58-year-old actor teamed up with former partner Vanessa Paradis on her fourth album, Bliss and wrote two songs on the album.

Speaking to NME about the track, Manson said: “He played drums and lead guitar and I played guitar and sang. It’s a bonus track on my new record and the video will probably be us looking at each other in a mirror.”

Depp has also had a rocking session with the legendary band Aerosmith.

LISTEN TO ‘YOU’RE SO VEIN’ HERE