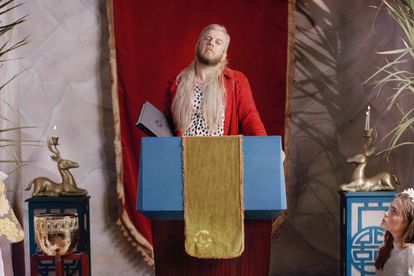 Since celebrating his 40th birthday on 22 February 2022, award-winning rapper Jack Parow has been on a mission, releasing a new single on the 22nd of every month. The Cooler as Ekke hitmaker is set to drop a new single every month until his seven-track album, Die Evangelie van Goeie Tye, has been completed in February 2023.

In 2021, Jack Parow travelled to the Knysna Forest in the Western Cape to fight “personal demons” and returned a stronger man. The rapper’s new single, Demone, is inspired by that experience. The music video for the single marks Parrow’s directorial and writing debut.

“It was a nerve-wracking experience, but I’m so glad I took it on,” he said.

The 40-year-old said Demone was “a deeply meaningful” song to him.

“Having to be so honest with myself, in such a scary mind space, was one of the things that got me out of that darkness and back into the light. This process led to a metaphorical rebirth in my mind state and my music. It is therefore fitting that Demone should be the first single from my new album, Die Evangelie van Goeie Tye.”

THE PEOPLE BEHIND ‘DEMONE’

Following the release of the Demone music video, Jack Parow thanked Jägermeister and his collaborator, Margot Rothman, for believing in his vision.

“A big thank you to Margot Rothman for her amazing voice and vibe, the team who worked with me to bring to life this project, the amazing models who were game for anything,” he said.

“I feel so honoured that everyone believed in my vision and allowed me to do what I needed. LOVE YOU.”

Parow and Angie oeh’s collaboration, Mesies & Partytjies will be the third track on the album. The collaboration was originally released in April 2021.

“It’s a reflection of any wild jol at your house; particularly during COVID curfew times. It could go either way, you know. You can end up with people who you love or people who irritate you… but I’m usually willing to take a gamble.”