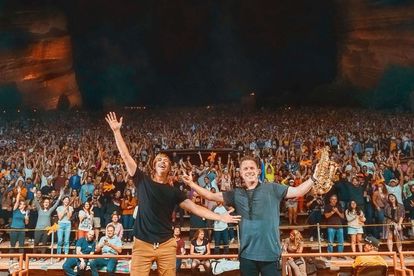 Goldfish will returning to South Africa for three shows this weekend! Image: Supplied

Goldfish will returning to South Africa for three shows this weekend! Image: Supplied

South African electro duo Goldfish are returning to South Africa for three performances this weekend. After several successful shows across the globe, GoldFish will be performing in Johannesburg, Cape Town and Durban.

Speaking to The South African, one half of GoldFish, Dominic Peters says the duo can’t wait to perform in front of their home crowd!

GoldFish has been taking the world by storm with a string of performances to international audiences. After ringing in the new year in Mzansi, the One Million Views hitmakers headed to Aspen, Colorado for a performance.

The duo then returned to London for their Printworks show and played at Lollapalooza in Chile, Argentina, Brazil.

The superstar duo is returning to South Africa for three performances this weekend. On Saturday 30 April GoldFish will be performing at Electric Circus at the Bersig Trout Farm in Johannesburg, on Sunday 1 May at Cabo Beach Club in Cape Town and on Monday 2 May at the Durban Botanical Gardens.

“We’re in South Africa for a good time not a long time,” Dominic Peters told The South African.

“Excited to be home and playing three shows this weekend before we head back to the States.”

“Coming to SA is like a B12 shot to the soul and we can’t wait to play in front of our home crowd. We have a new track out too!”

WHERE TO GET TICKETS?