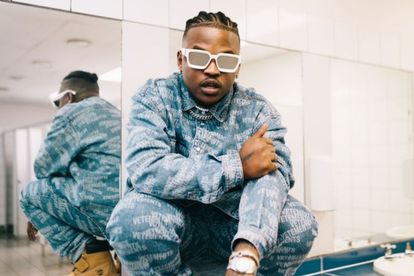 From the GQ Men of the Year awards to the African Muzik Magazine Awards (AFRIMMA), Focalistic has done it again. South Africa’s amapiano superstar bagged two awards at the 8th annual AFRIMMAs after being nominated seven times.

He picked up awards for Best Male in Southern Africa and Best Collaboration for his Ke Star remix featuring Davido.

The 8th annual AFRIMMAs were held virtually on Sunday 12 December with the theme “Flavours of Africa”. According to its website, the theme drew inspiration from the diverse flavours from across the African continent.

“Like the people, the food and the culture, the music comes in different melodic flavours and this virtual ceremony will be a music experience of the different flavours of African music,” highlight organisers.

FOCALISTIC SHINES AT THE AFRIMMAS

Focalistic also won the award for Best Collaboration for his Ke Star remix featuring Davido that was produced by Vigro Deep. The song made waves across the globe in 2021. Ke Star remix scored Focalistic his first-ever number one hit on the Nigerian Apple Music charts. The song was also certified platinum by the Recording Industry of South Africa (RiSA).

Taking to Instagram to celebrate his awards, Focalistic thanked his fans for believing in him.

“Thank you to all my believers!! We won two international awards at AFRIMMA !!” wrote the musician.

THE YEAR OF FOCALISTIC

Focalistic is one South African musician who has had an incredible 2021. The amapiano star travelled to several countries introducing the world to South Africa’s “sound of freedom”, amapiano. He travelled to the United Kingdom, Ghana, Dubai and Tanzania amongst several others.

‘Which South Africans?’: Tweeps snub day off for Queen’s funeral