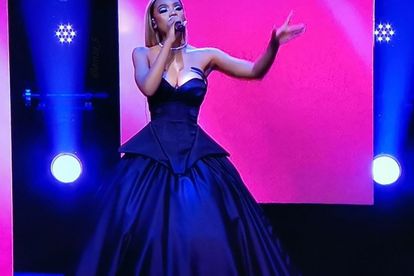 The Miss South Africa 2022 pageant on 13 August was a glamorous affair as Limpopo’s Ndavi Noreki walked away with the crown. Some of Mzansi’s chart-topping artists including Makhadzi and hip-hop star Rouge all performed, but it seems one performance missed the mark… Tweeps dragged R&B star, Elaine, after she took the Miss SA stage at the SunBet Arena in Pretoria. The 23-year-old performed her hit song, You’re The One from her debut EP, Elements.

Pretoria-born singer-songwriter Elaine opened the Miss South Africa 2022 pageant with rappers Boity, Rouge and Nadia Nakai. During the performance, the top 10 contestants were introduced to Mzansi before the pageant officially kicked off.

Miss South Africa host Anele Mdoda then announced that Elaine would be taking the stage again for a performance of You’re The One.

For her second performance, the R&B star kept it simple with a black ball gown and a slick back hairstyle.

Tweeps were certainly not impressed by Elaine’s performance. One tweep criticised the singer for not “singing on key”.

“Elaine decided to sing off key? What WAS THAT?” wrote one tweep.

“Someone said Elaine can’t sing and she’s not proving that statement wrong after that performance,” wrote another tweep.

‘I suffer from second-hand embarrassment guys and Elaine isn’t doing me any justice.”

“Elaine avoiding all the high notes because even she doesn’t believe she can hit them.”

ALSO READ: Who is Miss SA 2022? Five things to know about Ndavi Nokeri

After taking the United Kingdom and Canada by storm, Makhadzi returned to Mzansi for a performance on the Miss South Africa stage and she blew the crowd away! The Limpopo-born star stunned with her single MaGear and received high praise from social media users.