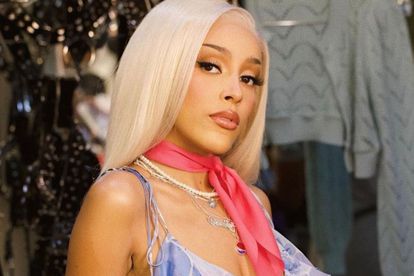 Doja Cat teamed up with Girls Who Code on the first-ever codable music video. Image via Twitter @HubDoja

Doja Cat teamed up with Girls Who Code on the first-ever codable music video. Image via Twitter @HubDoja

Grammy-nominated superstar Doja Cat is many things… Besides being a talented singer, she is an incredible dancer and a gifted songwriter. Doja Cat is also a genius when it comes to her music! She teamed up with Girls Who Code to create the first-ever codable music video for her single Woman from her album Planet Her.

ALSO READ: Emmy Meli: The voice behind TikTok’s ‘I Am Woman’ movement [watch]

DOJA CAT TEAMS UP WITH GIRLS WHO CODE

Doja Cat teamed up with Girls Who Code, a non-profit organisation that aims to close the gender gap in science and technology. Girls Who Code transformed the award-winning pop star’s Woman music video into a thrilling interactive experience.

Speaking to Dazed, Girls Who Code CEO Tarika Barett said girls and young women are some of today’s most powerful creators.

“However too few know that they can have a career in computer science. Most girls haven’t heard of coding, but they are passionate about activism or dance or music. Our job is to show them the connection between learning to code and pursuing those interests.”

Doja Cat’s Woman interactive video is the first-ever codable music video and Girls Who Code made it all happen! The video has three programming languages, CSS, Javascript and Python and features four codable moments.

The first codable moment allows you to choose a nail colour for Doja’s nails. It’s as easy as typing in which nail colour you prefer. The second lets you “Activate Doja power” as Doja Cat crawls across the table.

Take a look at the interactive video here

You can also opt for the non-coded Woman music video on YouTube.

DOJA AT THE GRAMMYS

Doja Cat scored eight nominations for the 64th annual Grammy Awards set to take place on 31 January 2022. The pop star is nominated for Record of the Year and Song of the Year for her collaboration with SZA, Kiss Me More.

Taking to Instagram to celebrate she thanked her team for their contribution to her music.