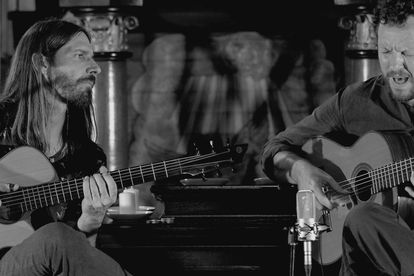 Derek Gripper and Guy Buttery will be touring the Western Cape for four shows. Images via Facebook Guy Buttery

Derek Gripper and Guy Buttery will be touring the Western Cape for four shows. Images via Facebook Guy Buttery

South African musos Derek Gripper and Guy Buttery have been named two of the country’s most talented artists. Gripper and Buttery recorded their 9-track album, Live in Cape Town in March 2021 but never had the opportunity to perform it. The musos are set to perform four shows in the Western Cape later this month.

Derek Gripper is a Cape Town-based classical guitarist who specialises in kora music from Mali in West Africa, specifically the music of Toumani Diabaté. Gripper has performed with Toumani Diabaté’s Symmetric Orchestra and guitar legend John Williams all over the world.

“When I play Toumani’s music, I insist on the fact that I am playing a composer’s music. It’s not entirely true, because Toumani didn’t compose the pieces that he plays – well, he did and he didn’t; it depends on your ideas of composition,” Gripper told Classical Guitar Magazine.

Guy Buttery has been named a “national treasure” and has travelled all over the world inspiring the world with his talents. Buttery’s sound is mostly focused around South African sounds. The KwaZulu-Natal-born musician was inspired by his hometown’s rich cultural history.

His debut album, When I Grow Up, released in 2002, was nominated for Best Instrumental Album at the South African Music Awards (Samas). The 38-year-old was also nominated for the Best Newcomer Award and became the youngest musician to be nominated for a Sama.

PERFORMING IN THE WESTERN CAPE

Derek Gripper and Guy Buttery are coming together for a short run of shows in April and May. The talented musicians will kick off their performances on 28 April at the Olympia Bakery in Cape Town.