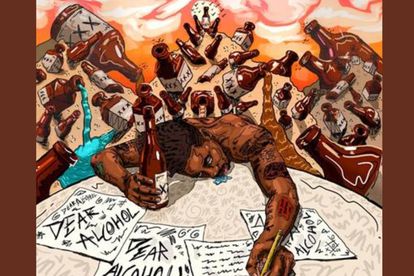 Nigerian-Canadian rapper and songwriter Dax returns with a powerful message as he unleashes highly anticipated visuals for his latest single titled Dear Alcohol.

DAX SHEDS LIGHT ON THE DANGERS OF ALCOHOL

Dax confronts his own demons and sheds light on the dangers of alcohol, admitting to the times in his life when he “got wasted” because he didn’t want to be alone with himself.

The rapper checks his sobriety in the powerful music video for Dear Alcohol. In the accompanying video. He laments on life struggles while drowning himself in an abundance of empty bottles and liquor. The song is currently trending,

“Dear Alcohol is a letter to myself and whoever can relate. I started drinking when I was 17 years old in my basement in Ottawa, Canada by myself. It was before my first house party. March 11th is the anniversary. I cracked open a Heineken and started drinking it and immediately got a head rush. I was very shy as a kid and didn’t party at all and that night at my first party I was the most social I had ever been,” he said in a statement.

Dax has made a name for himself in the music industry by creating his own lane of topic driven music that generates conversation. His most recent album Pain Paints Paintings debut at #3 on the iTunes Hip Hop charts and stayed in the top ten for two weeks.

Since, its release last year the album has over 13 million collective streams.

“I spent the next 10 years trying to bridge the gap between the confidence I felt when I drank and my normal self not to mention it then becoming a way to deal with other emotions. The balancing act is a war I know millions will relate to. This song is going to make an impact,” he continued.

The talented rapper is no stranger to the South African audience. Over one million followers on his Facebook page are from South Africa. He also recently collaborated with South African Hip Hop heavyweight Nasty C on his recent single titled 40 Days and 40 Nights which is currently above two million views on YouTube. Take a look…

Dax’s ultimate goal is to take meaningful lyrics and disguise them into his melodies. This is driven by his obsession to put something into the world that will last forever.