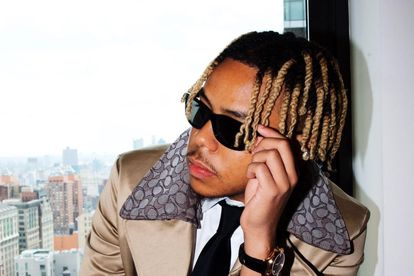 American rapper Corade has some words of wisdom for rappers who are keen on buying expensive jewellery. Image via Twitter @Cordae

American rapper Corade has some words of wisdom for rappers who are keen on buying expensive jewellery. Image via Twitter @Cordae

Most rappers these days flaunt expensive cars and flashy jewellery as they show off how much money they’ve accumulated from their hot bars. American rapper Cordae dropped some hot financial advice for his hip-hop colleagues who want to spend a fortune on expensive jewellery. The More Life rapper explained that he won’t buy a $100 000 (R1.5 million) chain unless he can afford it and one of our local rappers agrees!

Cordae Amari Dunston popularly known as simply Cordae has worked his way up to becoming one of America’s most talented rappers. Although he is at the top of his hip-hop game, he is not as flashy as some of his hip-hop colleagues.

Speaking to entertainment commentator DJ Akademiks on his Off the Record podcast on 5 November, Cordae shared some financial advice for his hip-hop colleagues.

“To really be able to actually afford it in a knowledgable and smart way, they’re gonna be like ‘You need to have $30 million, before you can really, really buy this $100 00 Cuban.’”

Cassper Nyovest is one South African rapper who has shown off his expensive taste with his designer clothes and expensive cars. Cassper added his voice to the conversation expressing his agreement with Cordae but said he prefers to have $10 million (R159 million) in the bank.

In the comments of the video, theTitio Mboweni rapper wrote: He’s 100% right but not 30 million, maybe 10 million. That would be a very very safe bet. Unless you just don’t want one at all then also that’s understandable.”

“Some people will spend that on other luxurious things like a holiday or gadgets.”

South African rapper LucasRaps first hit the local hip-hop radar in 2020 when he featured on Blxckie’s hit Big Time Sh’lappa. The rapper who is now signed to Def Jam Africa, has been living large and showing off his designer chains and his reported R14 million mansion.

“I’m not saying it’s not good, I’m saying it’s great because if I was a kid… but then again we talk about kids, the seals that kids get into very young.”

Although he did not address Makhathini directly, LucasRaps had some words for those who did question his luxurious lifestyle in an interview with The Plug.

“All I’ve done was become a businessman, understand how to be smart with brands, understand how to get paid from these brands and have a backbone when you email people. Those small things; get a f*cking team that’s actually going to work for you.”