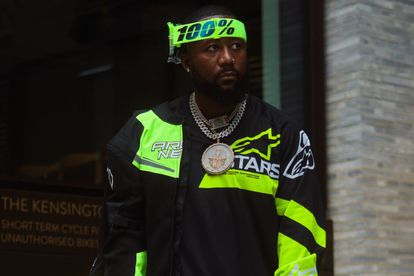 Cassper Nyovest has released his new single ‘Pardon My Arrogance’, which marks his second track release in September. Image via Twitter @casspernyovest

Cassper Nyovest has released his new single ‘Pardon My Arrogance’, which marks his second track release in September. Image via Twitter @casspernyovest

SA hip-hop star and businessman Cassper Nyovest has released his second single of the month, Pardon My Arrogance. The single was officially released on Wednesday 21 September and comes after 4 Steps Back, which was a response to Big Zulu’s fiery diss track, 150 Bars. Sadly for Cassper, Pardon My Arrogance received mixed reviews from Twitter users.

ALSO READ: Cassper vs Priddy Ugly: Why the boxing match might not happen

Taking to Twitter on Tuesday 20 September, Cassper Nyovest said his new single, Pardon My Arrogance, was in celebration of 4 Steps Back reaching one million views on YouTube.

“My promise will be kept. Every time a new song/video reaches a million views, I’ll drop another 1!!! It’s officially #NyovestiveSeason,” wrote the 31-year-old rapper.

Cassper teamed up with the United Kingdom-based musician Oliver King, better known as K1NG, on his new hip-hop track, Pardon My Arrogance.

Following the release of Pardon My Arrogance, tweeps had mixed reviews about Cassper’s new track. One tweep said the track was “garbage”.

“Cass blocked me kanene his latest song is garbage if you listen to his flow you realise that this guy blew up by mistake not talent,” wrote one tweep.

“He hasn’t been the same from the first two albums. Truth be told this Pardon My Arrogance is a very wack song that he ever released. I’m not a hater but I’m just stating facts,” wrote another tweep.

“Sorry haters Cassper is back and the sooner y’all deal with that the better.”

“We need to do sort of a petition for Cass to do a second verse. The song is too short.”

Cassper and Priddy Ugly are set to go head-to-head in a boxing match on Saturday 1 October at the SunBet Arena in Pretoria. This marks Cassper’s third boxing match following his win against Slik Talk in December, 2021 and his loss against Naakmusiq in April.

In a tweet on 16 September, Cassper said if he wins against Priddy Ugly, he would like to face Big Zulu next.

“After I knock out this Priddy Ugly dude out, want Big Zulu next fight!!!”