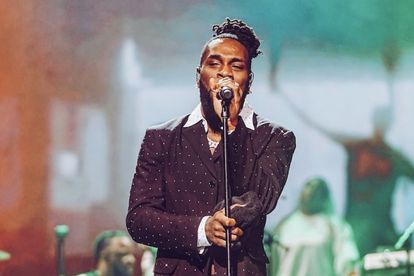 Burna Boy is the first Nigerian artist to have sold out Madison Square Garden. Image via Twitter @RollingStone

Burna Boy is the first Nigerian artist to have sold out Madison Square Garden. Image via Twitter @RollingStone

The Grammy award-winning Nigerian star performed to a sold-out crowd on Thursday 28 April and wowed the audience with some of his biggest hits. Burna Boy also announced his upcoming sixth studio album, Love, Damini.

ALSO READ: Nigerian music star Wizkid is taking over the world with Afrobeats

Burna Boy performed to a crowd of more than 20 000 people at Madison Square Garden for his One Night In Space Concert. As per Variety, the Bank On It hitmaker was introduced by legendary rapper Busta Rhymes who explained that the concert was more than “just a standard concert”.

The 30-year-old Nigerian muso opened his two-hour show with Level Up and performed his other hit tracks, On the Low, Collateral Damage and Ye.

Taking to Twitter, music lovers across the globe praised Burna Boy for his incredible performance at Madison Square Garden.

“I applaud your decision to keeping Nigeria on the global map. You are indeed an African giant, Let’s all strive to build a Nigeria that can accommodate rising talents.” wrote one tweep.

“Nobody does live concerts like Burna Boy,” wrote another tweep.

“He didn’t make the fans do the heavy lifting of singing. He sang. He performed. Live. A cut above the entire field,” wrote another tweep.

“Burna Boy is up there as one of the best live performers in Africa!”

The Nigerian muso surprised fans at his one-night-only concert and announced his upcoming album Love, Damini set to be released on 2 July.

Taking to Twitter on Saturday 30 April, Burna Boy shared that Love, Damini is a “personal body of work”.

“It’s about the ups and downs, the growth, the L’s and W’s. I’m excited to share this journey and roll out with you all,” he wrote.