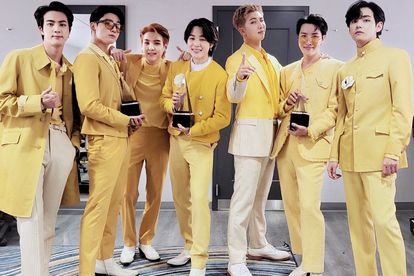 BTS won the artist of the year award at the 2021 American Music Awards on Sunday 21 November. Image via Twitter @bts_bighit

BTS won the artist of the year award at the 2021 American Music Awards on Sunday 21 November. Image via Twitter @bts_bighit

K-pop band BTS has taken the world by storm with their pop hits since 2013. The popular boy-band were the big winners at the 2021 American Music Awards (AMAs) on Sunday 21 November. They walked away with three awards including artist of the year award and became the first Asian group to achieve this!

The AMAs were hosted by American rapper Cardi B at the Microsoft Theatre in Los Angeles. The Bodak Yellow hitmaker is only the second female rapper in history to host the awards after Queen Latifah in 1995.

Cardi B also became the first artist to win favourite rap/hip-hop song three times. The big winners of the evening were pop star Olivia Rodrigo who won new artist of the year and Doja Cat who won collaboration of the year for her single Kiss Me More featuring SZA.

CHECK OUT THEIR ACCEPTANCE SPEECH HERE

BTS AND COLDPLAY STEAL THE SHOW

There were star-studded performances from Silk Sonic (Bruno Mars and Anderson Paak) who performed their single Smokin Out The Window from their new album An Evening With Silk Sonic.

BTS and Coldplay stole the show with a performance of their collaboration My Universe. This was the first time the two talented groups performed the song together.

WATCH THE ‘MY UNIVERSE’ PERFORMANCE HERE