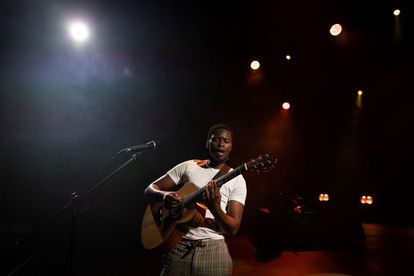 Bongeziwe Mabandla cuts a striking figure: A muscular folk musician with his trousers rolled up above his ankles, there is still something of the little boy who grew up in the hills of South Africa.

Nominated for a South African Music Award (Sama) in 2018, Mabandla has grown hugely popular in his home country and has performed at concerts and festivals overseas.

He cut his latest album during the height of the pandemic, drawing on the heritage of maskandi, the musical tradition of migrant workers. During apartheid, trains crossed South Africa carrying workers in livestock cars to labour on the gold and coal mines.

Others walked miles to work sugar cane fields. Men left their wives and children behind, and during their long absences, they created a new genre of music.

They sang about their loneliness, their labour, and the travails of everyday life. Thus was born the “Zulu blues”.

In his thirties – he refuses to reveal his exact age – Mabandla performs with his guitar, alone on stage with a drummer. On his latest album, iimini, or “The Days”, he sings love songs in his home language, isiXhosa, with all of its distinctive clicks.

“Xhosa language is very lyrical, very expressive,” he told AFP. “It’s a form of activism, keeping your culture, loving yourself.”

Even those who don’t speak the language can understand the emotions of what he’s singing. His voice conveys both the hurt and the jumbled feelings that love can engender.

“It really speaks about how love can change you,” he said of the lead single Zange, or “Never”.

Born in a village in the south of the country, Mabandla burst onto the Afro-folk scene in 2012 with his debut album, Umlilo. He’d discovered the guitar as a child in the Eastern Cape, the vast southeastern province that’s home to a rich tradition of music and literature.

“My childhood was very happy, I grew up with my mother. A normal, humble sort of growing up,” he said. “I never thought I’d be a musician.”

Like many others from rural South Africa, he left for the city in the early 2000s, hoping to make his way in Johannesburg, home to much of the country’s recording industry.

He cites among his influences American artists Tracy Chapman and Lauryn Hill, as well as the Zulu singer Busi Mhlongo – a pioneer of modern interpretations of the maskandi sound.

Tiago Correia-Paulo jumps in with ‘iimini’

For iimini, he decided to incorporate some sampling and electro elements. So he tapped Mozambican producer Tiago Correia-Paulo, the former guitarist of South African hip-hop group Tumi and the Volume, which enjoyed international success before breaking up.

The end result is well-paced, rhythmic sequences and RnB-style escalations that fill the room. At a recent concert in Johannesburg, the crowd shouted out “Yebo!” a South African word of approval, as the crowd sang and danced in a concert hall that COVID had for too long left silent.