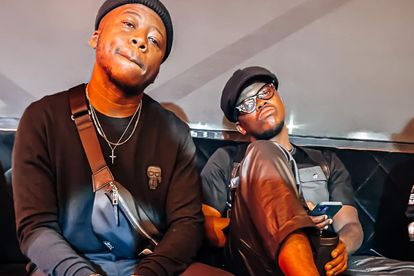 Award-winning duo Black Motion are back in the studio working on new music for their fans. Image via Facebook Black Motion

Award-winning duo Black Motion are back in the studio working on new music for their fans. Image via Facebook Black Motion

Controversial entertainment blogger Musa Khawula set Twitter ablaze in April after claiming that the much-loved duo Black Motion, made up of Bongani “Murdah Bongz” Mohosana and Thabo “Smol” Mabongwane had split. The Prayer for Rain hitmakers dispelled the rumours and are back in the studio making music again!

On 29 April, Musa Khawula took to Twitter claiming that Black Motion had split after Murdah Bongz changed his name to Mörda. In a statement, the talented musicians confirmed Murda Bongz’s name change adding that he was preparing to launch his solo career.

“We trust that this dispels any rumours or uncertainties from our fans, industry peers, promoters, brand agencies or any future events we are booked at,” read a portion of the statement.

“Lastly, we would like to say a big thank you to all our supporters for their endless love.”

Black Motion’s last album, The Healers: The Last Chapter, was released in September 2020 and featured Msaki, Sun-El Musician, Brendan Praise and Ami Faku amongst others.

Nearly two years later, the duo is back in the studio and ready to release some new music for their fans. Taking to Instagram on 20 July, Black Motion wrote: “Cut the noise – let the music go on”.

In another post, the duo wrote: “Black Motion is dropping soon…! Let them talk, but the music lives on.”

DID PRINCE KAYBEE GET THE MEMO…?

Even after Black Motion poured hot water on the split rumours, it seems Prince Kaybee did not get the memo… While on tour promoting his Genesis album, the Charlotte hitmaker expressed his thoughts about rumours that Black Motion had split.

“Still in disbelief that Black Motion is no more, the most decorated and astounding duo of our time,” wrote Kaybee.

Responding to the muso, one tweep wrote: “Black Motion put out a statement to defuse this situation.”