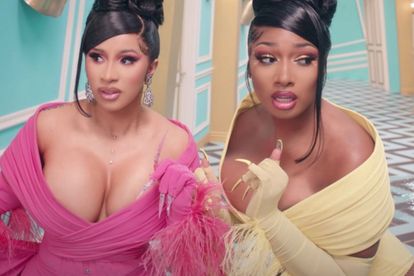 Cardi B and Megan Thee Stallion. Image via Twitter @FemaleRapRoom

Cardi B and Megan Thee Stallion. Image via Twitter @FemaleRapRoom

The rap duo’s mega-hit was crowned Song of the Year, and also scooped Best Hip Hop Video and Best Collaboration at the annual ceremony, which aired on Tuesday night 5 October.

Cardi B made history as the first female artist to win Best Hip Hop Video twice, having been honoured with the same prize for Money in 2019.

Tyler, the Creator, Jay-Z, and Lil Baby followed closely behind with two wins each.

The 30-year-old star took home the first-ever Rock the Bells Cultural Influence Award presented by LL Cool J, and also nabbed Best Live Performer and Hip Hop Album of the Year for Call Me If You Get Lost.

Beyonce’s music mogul husband, meanwhile, won the Sweet 16: Best Featured Verse and Impact Track accolades for his Nipsey Hussle collaboration What It Feels Like, and Lil Baby scooped Hip Hop Artist of the Year and Best Duo or Group with Lil Durk.

Nelly won the special I Am Hip Hop honour and dedicated his win to his city of St. Louis in Missouri and his “whole crew.”

The 46-year-old rapper also took to the stage to perform a greatest-hits medley, including E.I., Country Grammar, Dilemma, and ‘Where The Party At with surprise guest Jermaine Dupri.

The ceremony was pre-recorded at the Cobb Energy Performing Arts Center in Atlanta, Georgia last week and aired on BET.

An abridged list of the winners is as follows: