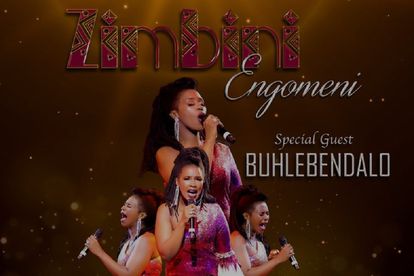 The concert will feature the sensational Zimbini with special guest Buhlebendalo singer of the Afro-soul group The Soil. Image via @zimbini_makwetwu/Instagram

The concert will feature the sensational Zimbini with special guest Buhlebendalo singer of the Afro-soul group The Soil. Image via @zimbini_makwetwu/Instagram

Elvis Sibeko Studios in association with Artscape Theatre is presenting a multi-dimensional Afro-pop concert at the Artscape Opera House.

Zimbini Engomeni (loosely translated Zimbini in song) is a retrospective concert that showcases Zimbini Makwetu’s music career. Known by her stage name, Zimbini was born in the Eastern Cape in Cofimvaba.

She is an award-winning soundscape artist, songwriter, musical director, music teacher, composer and international performer. Zimbini’s debut CD Ndiyehlela released last year on Elvis Sibeko Studio Records will be re-launched at this concert. It will be on sale at R120 per CD and also be available on digital platforms.

This spectacular concert will feature the sensational Zimbini with special guest Buhlebendalo singer of the Afro-soul group The Soil.

The concert is a 90 minutes musical journey that features singers such as Nomakrestu, Black Pearls, Baba Yaya, the South African Youth Choir and Dj Tarenzo who will spin discs in between acts.

Also on the bill are dazzling dancers from Jazzarts Dance Theatre and Sbo Ndaba Dance.

“Featured in this show are singers who have worked with Zimbini over the years. They will be singing songs that are in her latest double CD, Ndiyehlela, “says studio director Elvis Sibeko.

“Zimbini and Buhlebendalo will also sing a theme song Hata (meaning be careful in isiXhosa) of the show. It will be the first time that they sing this song which will be release later in June, on digital platforms.”

Zimbini Makwetu grew up in a musical family and was always the lead singer at church. She moved to Cape Town in 2007 and joined Future Lines Arts Academy based in Khayelitsha and did her performance studies at Magnet Theatre in Observatory.

In 2012, she became part of the spoken word movement called Lingua Franca as a lead vocalist. She later started to compose her own music and began to create soundscape digital music for theatre productions around Cape Town. She also directed and perform in theatre productions. This led to Zimbini having multiple awards and recently received an award from Fleur Du Cap Theatre Awards for the Best Sound Design, Original Soundscape, Live Performances 2020.

Buhlendalo’s complete vocal prowess is completely aligned with her stage presence and performance, she leaves you in awe, breathless and gasping for more. Emerging from the dusty, yet deeply conscious streets of Soweto, armed with a voice and hunger to sing, Buhlebendalo has not only made an indelible mark in this cutthroat industry, but she also has created a cult following of her own.

A life-long dream to release her solo album, and with the blessings of those who walk beside her, Buhlebendalo now embarks on a musical journey where eagles dare. Not a stranger to the stage Buhlebendalo has already graced stages, performing at concerts and festivals, locally and abroad in East and Western Europe, Asia Pacific, Oceania, North and South America, East and Southern Africa at festivals such as Womad, Edinburgh Festival, AfroVibes, Africa Now (Apollo), White Nights in St Petersburg and Bassline.

The concert takes place on 2 July at 3pm. Tickets are available here.