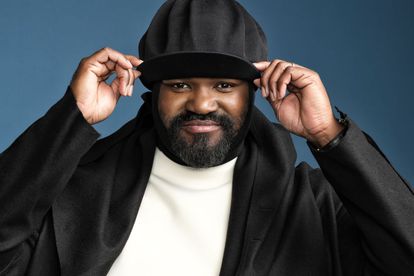 Grammy-winning jazz icon Gregory Porter will be jetting down to Mzansi in January 2023 for his first solo show. Image: Supplied

Grammy-winning jazz icon Gregory Porter will be jetting down to Mzansi in January 2023 for his first solo show. Image: Supplied

Two-time Grammy-winning singer and iconic jazz musician Gregory Porter is set to return to South Africa in 2023 for performances in Johannesburg and Cape Town. The New York-based musician will perform one show at the Kirstenbosch National Botanical Garden in the Mother City before jetting to Joburg for three shows at Montecasino’s Teatro.

American jazz musician Gregory Porter is easily recognisable by his stylish signature cap and deep baritone voice. Porter rose to fame in the 2010s with his heartwarming jazz, soul and gospel singles.

The 50-year-old musician has even been compared to the likes of Nat King Cole, Donny Hathaway and Stevie Wonder. Porter caught the world’s attention after scoring a Grammy nomination for his 2010 debut album, Water.

Since then, the jazz icon has released five studio albums and has collaborated with the likes of Ella Fitzgerald, Jamie Cullum, Laura Mvula and the London Symphony Orchestra.

Gregory Porter first touched down on South African soil in 2014, when he performed at the Joy of Jazz Festival. He returned to Mzansi in 2015 for the same festival and has developed a strong fan base in South Africa.

“Whether he’s recording, streaming or live on stage, Gregory Porter is big in stature and voice but far bigger in the hearts of his South African fans,” said Tony Feldman of Showtime Management.

“We are looking forward to hosting this music giant when he returns next year.”

The iconic jazz musician will kick off the An Intimate Evening with Gregory Porter tour in Cape Town on 21 January at 19:00. After serenading the Mother City, Porter will head to Montecasino in Johannesburg where he will perform between 26 and 28 January at 20:00.