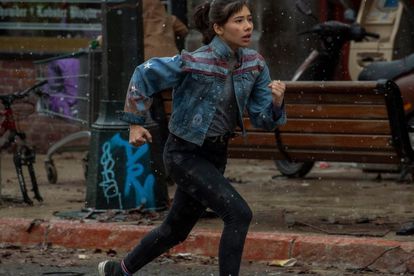 Doctor Strange in the Multiverse of Madness officially hit cinemas on Thursday 5 May and Marvel fans across the globe were excited to witness Doctor Strange in action. The film also introduced fans to America Chavez, played by Xochitl Gomez, one of Marvel’s most popular queer characters.

‘DOCTOR STRANGE IN THE MULTIVERSE OF MADNESS’

America Chavez, who has the ability to travel between different universes, crosses paths with Doctor Strange (Benedict Cumberbatch). Chavez, who is on the run from a demon, turns to Doctor Strange for safety, but the two run into some obstacles throughout their journey.

Marvel fans were first introduced to America Chavez in 2011 through the comic series. Now, she is blowing fans away with her superpowers in Doctor Strange in the Multiverse of Madness.

Speaking to Entertainment Weekly, the 16-year-old said it was important for her to “keep that youthful, fake-it-till-you-make-it kind of vibe”.

“In this movie, there’s a lot of heavy stuff going on. It’s not easy when you’re a teenager and you have all this pressure and crazy stuff going on around you. You have to remember that you are a kid. You’re allowed to make mistakes and we’re all learning,” added Gomez.

The film’s director, Sami Raimi praised the young actress for having a “flippant quality to her”

“She’s got a lot of spirit,” added Raimi.

“Xochitl Gomez as America Chavez is a good choice, her acting and performance were excellent,” wrote one tweep.

“Xochitl Gomez did such an incredible job. America Chavez easily will become one of my favourite characters she did not disappoint,” wrote another tweep.

“GIving Ms Xochitl some love too because she held her own pretty well considering she was acting with the big people!!”