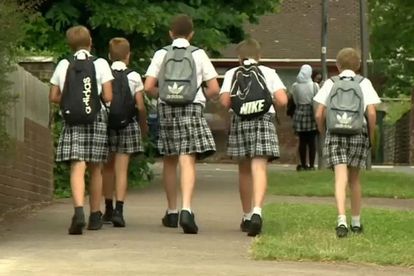 Should kids be awarded for attending school. Image via Twitter @euronews

Should kids be awarded for attending school. Image via Twitter @euronews

Many schools in South Africa allow girls to wear long pants as part of their uniforms during the colder months. A debate about boys wearing skirts was sparked recently after a Cape Town schoolboy wore one to school. LGBTQI+ organisation, the Triangle Project, told Cape Argus that boys should be allowed to wear skirts to school.

WHERE IT ALL BEGAN

According to Cape Argus, the “boys wearing skirts” debate started in a group chat with parents and school alumni. A boy wore a dress to school that left the members of the group chat questioning whether it should be allowed.

As per the Parliamentary Monitoring Group (PMG), essential uniform items for boys include shorts and long trousers. For girls, the essential items include skirts, dresses, tunics, long trousers and tracksuit pants.

“Unwillingness to wear an approved school uniform must be treated as a disciplinary matter,” writes the PMG.

Commenting on the “boys wearing skirts” debate, the Triangle Project told the publication that it should be allowed at school.

“Schools need to adopt dress codes that allow for gender-neutral uniforms and creative combinations of clothing items, which any learner should be able to wear regardless of their gender identity or sex.”

WCED’s Bronagh Hammond added that the department was drafting guidelines on gender identity and sexual orientation in public schools which will be available later in the year.

“Schools are encouraged to accommodate the dress code preferences of LGBTQIA+ learners in their respective codes of conduct and may introduce gender-neutral uniforms,” said Hammond.

Equal Education (EE), a non-profit organisation that advocates for quality education also weighed in on the matter.

EE researcher Stacey Jacobs said the dress codes developed by schools should allow pupils to wear a combination of clothes that are part of the school uniform.

EE Education Law Centre junior attorney Pila-sande Mkuzo said LGBTQI+ pupils have been bullied and discriminated against by their peers and educators.