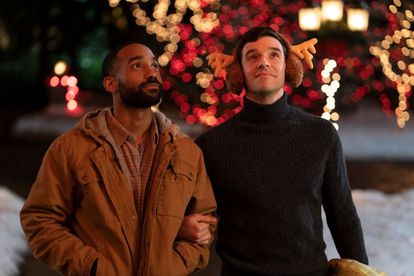 Netflix always delivers when it comes to comedic Christmas films and the streaming service is set to release its first LGBTQI+ holiday film! The romantic comedy titled Single All the Way is set to be released at the beginning of December and it features an all-star cast!

‘SINGLE ALL THE WAY’ CAST

According to Entertainment Weekly, a gay romance is the center of this upcoming Netflix Christmas movie, Single All the Way. Directed by Michael Mayer the film sees Peter (Michael Urie) convince his best friend Nick (Philemon Chambers) to accompany him home for the holidays and pretend they’re dating.

Unfortunately, things don’t go too well for Peter when he finds out his mother Carole, (Kathy Najimy) is planning to set him up on a blind date with James (Luke MacFarlane), her spin class instructor. Legally Blonde star Jennifer Coolidge will also make an appearance in the film as Aunt Sandy.

Ugly Betty star Michael Urie describes his character as: “a self-described plant-gay – he has a fern named Judith – trapped in a social media job he doesn’t love and is always single when he goes home for the holidays.”

“Peter is the kind of Guncle who has spent many Christmases perfecting choreography to a Britney Spears Christmas song with his nieces. And it is perfect.”

The 41-year-old actor also said Single All the Way is the “gayest” thing since Mariah Carey.

ALSO READ: Ben Whishaw reckons a gay Bond would be ‘extraordinary’ and ‘thrilling’

The first-look images for Single All the Way were released on Wednesday 6 October and although there are only three of them, it’s safe to say Jennifer Coolidge will give us a few laughs while Michael Urie warms our hearts!

Single All the Way is set to be released on 2 December.