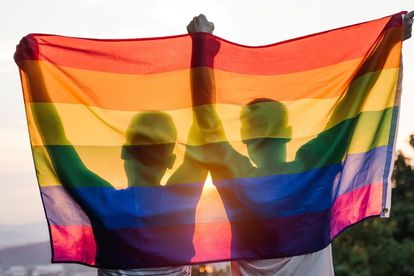 This year marks 31 years since the first Pride Parade in South Africa. On 13 October 1990, the first Pride March — organised by the Gay and Lesbian Organisation of the Witwatersrand (Glow) — took place in Johannesburg. The purpose of the event was to provide a wider platform to voice various political concerns.

Speakers at the event included activist and filmmaker Beverly Ditsie who is described as “the woman who helped liberate lesbians everywhere”, Justin Edwin Cameron and gay activist Simon Nkoli who passed away in November 1998.

Speaking at the historic event, Nkoli said: “I am black and I am gay. I cannot separate struggles. They will be all one struggle.”

Marching together with Pride and joy

The Pride March in Johannesburg is the largest Pride event in South Africa. This year it will take place virtually due to the COVID-19 pandemic on 30 October.

Activist and actor Thami ‘“Dish” Kotlolo, popularly known as Thami Dish, commemorated the beginning of Pride Month today in a significant way at Constitutional Hill in Johannesburg. Constitutional Hill was a jail where the likes of Nelson Mandela, Oliver Tambo, Winnie Madikizela-Mandela and Albertina Sisulu have been held.

Along with several other significant names in the LGBTQI+ community and the Mzansi Gay Choir, Thami Dish raised the Pride flag at the Constitutional Hill, and in his speech, he said: “Today is a special day for us. It’s the first of October and in the country it is Pride Month.”