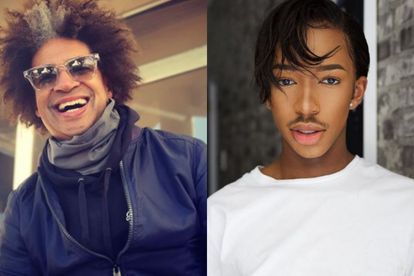 Marc Lottering and Lasizwe Dambuza are just two Mzansi celebs who are out loud and proud about their sexuality. Images via Instagram @marc_lottering @lasizwe

Marc Lottering and Lasizwe Dambuza are just two Mzansi celebs who are out loud and proud about their sexuality. Images via Instagram @marc_lottering @lasizwe

Some of South Africa’s celebrities have been proud and out loud about being queer. Here are nine SA celebs that are proud of representing the LGBTQI+ community! The list includes the likes of PJ Powers, Thandiswa Mazwai, Lasziwe Dambuza and Toya Delazy.

Somizi might be one of South Africa’s most popular LGBTQI+ celebrities. The television personality is an openly gay man who is not afraid to bring it. The former Idols SA judge always stuns in flamboyant outfits.

Award-winning musician PJ Powers has been the voice behind some of South Africa’s biggest songs including You’re So Good To Me, Jabulani and There is Answer.

In 2014 she told MambaOnline that she’s always assumed that the public has been aware of her sexuality.

“Oh, the whole world knows that I am gay. But I don’t walk about screaming ‘I am what I am’”.

“I don’t like to define myself by my sexuality but when I walk into a room with my girlfriend, people ko know that we are a couple.”

Stand-up comedian Marc Lottering is an openly gay man. In an interview with OkayAfrica, he shared that while he was at a show, one of the directors he worked with persuaded him to come out “casually” in a show. Although his manager fought against it, the 53-year-old comedian did it anyway.

“When I did make reference in the show as to me being gay, it was almost like a moment of boredom from the audience, because they were like, ‘We know. Are you really thinking about announcing this? We know you’re gay. You dress well, you smell great. Obviously, you are not straight.’”

Actor and television presenter Sade Giliberti is also a part of the LGBTQI+ community. In a lengthy Instagram post, Giliberti shared that was forced to come out to her father when she was 19 years old after being outed by her journalist.

“There was a possibility that this could have ‘ruined my career’. My father featured the same thing, more so he feared for my safety,” she wrote.

She currently lives with her partner Chané in London.

In a 2020 tweet, singer-songwriter Thandiswa Mazwai revealed that she stopped dating men 14 years ago. “Men are nice and everything but women are such more. I’m sure you will agree.”

“The biggest part of that story is the fact that my partner is who I’m really co-parenting with. She has been so selfless and committed and loving.”

“When I realised I was gay, I hated the word. I knew it meant I was different and at the time I didn’t know any other gay people except myself. Very confusing time,” the Ingoma songstress wrote.

Flamboyant social media personality Lasizwe Dambuza is also an openly gay man. Speaking to Sowetan in 2017, he revealed that he lost friends at school because they thought he was romantically interested in them.

The star shared that the entertainment industry was not very welcoming because of his sexuality.

“If it’s not my gayness, it’s my age. People like what I did but will not hire because of sexuality.”

Speaking on her relationship with Lebo she said that she was told by many that sharing the news would ruin her career.

“I tried to imagine myself in this ‘secret relationship’ and the complexities of not being able to really be me and to proudly love this amazing soul by my side.”

Toya Delazy has always been open about her sexuality. In an interview with City Press, she expressed that she told her grandfather (Inkata Freedom Party (IFP) founder Mangosuthu Buthelezi) that she hated dresses.

“That was the first time I was allowed to go to church wearing pants and everyone just got over it,” she explained.

The London-based muso married long-term partner Allison “Ally” Chaig in an intimate ceremony in 2021. The two welcomed their first child together earlier this year.

Simphiwe Dana is one of South Africa’s most popular singers. In a series of now-deleted tweets posted in 2020, she came out as a member of the LGBTQI+ community as gay saying she had been holding it in forever.

“I know coming out means Africa will block me. But, after a lot of thinking, I’m okay with it. I’m marrying a woman, and I’ve never been happier.”